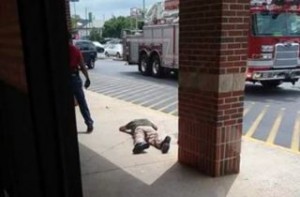 The story of an Alabama police detective went viral this week after being pistol-whipped with his own gun for fear of becoming the newest police headline.

“A lot of officers are being too cautious because of what’s going on in the media,” the officer later told reporters. “I hesitated because I didn’t want to be in the media like I am right now.”

The officer, who has asked to remain anonymous, was attacked last Friday after stopping a car that was erratically moving down the highway. After pulling-over to a parking lot at a shopping mall, Janard Cunningham reportedly got out of the car, sucker-punched the officer, and then grabbed the officers gun which he used to pistol-whip him unconscious.

After waking up in the hospital with stitches and a concussion, the officer said that he could have used his gun after Cunningham became noticeably belligerent and uncooperative, but refrained for fear of becoming a media pariah. The officer is expected to make a full recovery.

Bystanders reportedly saw the beating while it was happening, but chose not to call 911 and instead, took pictures that were put online with disparaging messages. “Pistol whipped his ass to sleep,” one user wrote, while another sarcastically offered milk and cookies for the man’s “nap time.”

Sargeant Heath Boackle and Police Chief A.C. Roper said on Thursday that the detective was lucky to be alive, and that cops everywhere are “walking on eggshells because of how they’re scrutinized in the media.”

The nobility and integrity of policing has been challenged…As a profession, we have allowed popular culture to draft a narrative which is contrary to the amazing work that so many officers are doing everyday across this nation.

Cunningham tried to flee the scene, but was caught soon afterwards and now faces charges of attempted murder.

You can see a report of the incident here, via CNN: