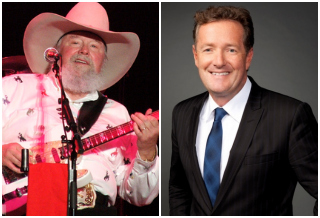 Nearly one year to the day after gun advocates started petitioning the White House to deport Piers Morgan over his calls for more gun control, country rocker Charlie Daniels revived the call on Twitter. But this time, it was all about Duck Dynasty’s Phil Robertson.

Unlike the gun debate, in which Morgan was something of a singular voice in his passion for action after the Sandy Hook Elementary School shootings, the CNN host has been just one of many commentators calling Robertson’s comments about homosexual sex and the Jim Crow South offensive. But he has not held back his opinions on Twitter, especially when he issued this suggestion for Robertson:

Phil Robertson should spend the holiday watching "12 Years A Slave" and "Brokeback Mountain". See if that helps with his 'Christianity'.

At first, Daniels simply called on Morgan to leave the country, without offering any specific reasoning:

But once he clarified why he was so angry at Morgan, and saying he “wouldn’t less five minutes” in the swamps of Duck Dynasty, the host decided to start responding:

Me… if you're gay. > RT @CharlieDaniels If you had to go to war who would you want to watch your back Piers Morgan or Phil Robertson

Soon, Fox News contributor Katie Pavlich got in on the conversation, labeling Morgan the “biggest bigot on television”:

Biggest bigot on television, @piersmorgan, is lecturing Americans on bigotry. As usual, he's doing it without facts to back up claims.

But things really got crazy when Alec Baldwin jumped into the fray to declare that “The United States is a place obsessed with hate”:

The United States is a place obsessed with hate.