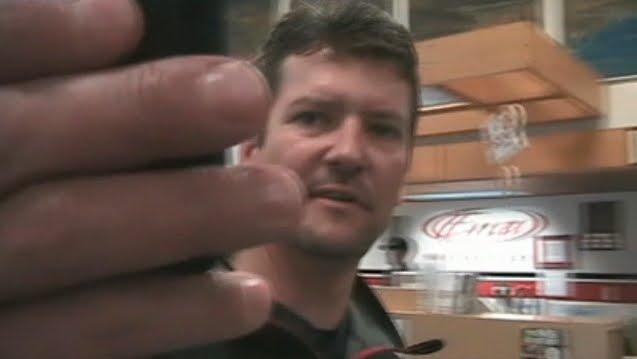 The website Palingates has posted an amateur video, by an Alaska skateboard/espresso mogul named “Hawk,” of a bizarre encounter at Alaska’s Valdez airport. According to the site, the video shows Sara Palin husband Todd “bullying” a Valdez citizen.

In reality, the incident isn’t so one-sided, and will likely act as a sort of Palin Rorschach test, confirming whatever the viewer already feels about Palin. Taken together with this video from a few weeks ago, however, a pattern of passive-aggressive behavior toward the Palins’ fellow Alaskans emerges. (h/t The Political Carnival)

It is important to note that this clip begins outside the airport, and the Palins are not surrounded by security. It is a vulnerable spot. We also have no idea what the Palins are seeing. Hawk could be wearing a “Travis Bickle for President” t-shirt, for all we know.

When Palin asks “Hawk” what his name is, he pauses, then says “What’s your name?”

Was he trying to be funny? Perhaps. But at this point in the video, many will identify with the Palins. Hawk’s understandable nervousness translates as kinda creepy here. This seemed to set the tone for the rest of the encounter. While Sarah Palin amiably tries to draw him out, Todd understandably starts playing the part of protector, snapping “Hawk’s” picture and asking him to repeat his name.

As provocations go, Hawk’s actions seem fairly innocuous. While the Palins aren’t required to be flattered by the attention, some will assert that they ought to at least be able to ignore a minor annoyance like this. Instead, as Hawk follows them into the airport (at what seems to be a somewhat respectful distance), Todd circles back to get in his face, asking “Why you shaking so bad?”

This is bad optics, to be sure, but most people can forgive a husband an occasional overprotective lapse. It’s the end of the tape, where Todd runs into the guy later, that really looks bad for him:

According to Hawk, here’s what happened toward the end of the tape:

10-15 minutes later, in a different part of the airport:

My camera is still switched off, and next thing I know, right after my wife walks off, Todd runs right into the back of me, so I flip the camera back on, spin around and there he is with his camera right in my face again. Unfortunately, it took a few seconds for the camera to turn on, so I didn’t catch the first thing he said to me which was “Why are you videotaping my wife?,” Which I wasn’t. I was leaving. I never saw him sneak up this time either, but here’s the rest that’s on tape.

Me: Why do you have a problem with it?
TP: Why are you doing that?
Me: I didn’t stick it in your face. I was never…
TP: Why did you stick the camera in Sarah Palin’s face? Why did you do that?
Me: I wasn’t within 10 feet of you guys.

Now it looks like he’s filming me one-on-one with his camera phone, he’s got it stuck in my face but it’s not taking pictures and he’s following me with it. Todd advances closer and closer to me and I keep backing up to avoid a confrontation. At this point, you just now see Sarah and Greta coming down the hallway towards us. They had been no where near me.

Me: Do you have a problem with me being here with a camera? (Evil eye from Todd at this moment…..)

Then the little brunette who I believe was a member of Greta’s Fox News team jumps in and says “No.. There’s no problem.. there’s just nothing to see here.”

Me: My wife is getting on that plane…I am just here.

That’s when she starts hitting the front of my camera with her notes.. I just say “niiiiice” and they all finally wander off to the loading area. Sarah turns around for one last stare at me.

Between this and the Kathy Gustafson video, the “First Dude’s” PR efforts are building a “Sarah Palin vs. the Lamestream Citizenry” narrative that likely doesn’t help their relationship with the media. While Sarah Palin exercised restraint in this clip, she’s still the one who will reap whatever press results from it, good or bad.