David Frum Says He Was Fired Because Of His ‘Waterloo’ Column

David Frum Says He Was Fired Because Of His ‘Waterloo’ Column 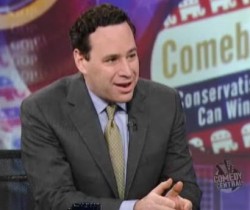 It did seem a tad coincidental. Just days after penning his much talked about ‘Waterloo’ column (as in HCR was the GOP’s Waterloo) conservative thinker and former Bush administration official was fired from his $100,000/yeah job at the American Enterprise Institute, where he’d been since 2003. The firing apparently came as much as a surprise to Frum as it did to everyone else. No room for reality checks on the right? went much of the speculation.

Frum, who was supposed to appear on Countdown last night and canceled, unloaded to Politco’s Mike Allen instead, asserting that it was “donor pressure” following the ‘Waterloo’ post that led to his dismissal. From Politico:

‘There’s a lot about the story I don’t really understand,’ Frum said from his iPhone. ‘But the core of the story is the kind of economic pressure that intellectual conservatives are under. AEI represents the best of the conservative world. [AEI President] Arthur Brooks is a brilliant man, and his books are fantastic. But the elite isn’t leading anymore. It’s trapped. Partly because of the desperate economic situation in the country, what were once the leading institutions of conservatism are constrained. I think Arthur took no pleasure in this. I think he was embarrassed. I think he would have avoided it if he possibly could, but he couldn’t.’

So perhaps the economic state of journalism these days more than the state of the GOP. More from Allen.

We talked at length afterward with an AEI official in an effort to get a specific response to Frum’s charge. But the group apparently doesn’t want to get into a back-and-forth with Frum, and stuck to this earlier statement from Brooks, blaming Frum for his departure: ‘David Frum is an original thinker and a friend to many at AEI. We are pleased to have welcomed him as a colleague for seven years, and his decision to leave in no way diminishes our respect for him.’

This is followed by some speculation that perhaps the real problem was how little time Frum spent at the office. Though the timing is really just too convenient for that to be anything more than a small contributing factor.