Letterman’s Sex/Extortion Revelation: Where Does It Go From Here?

Letterman’s Sex/Extortion Revelation: Where Does It Go From Here? 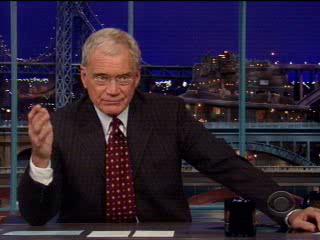 News broke last night that David Letterman was the victim of a $2 million extortion attempt, while simultaneously revealing he had affairs with several Late Night staffers in the past. It was a huge, bizarre story that is still very much developing – and the perfect catnip for all media. From newspaper frontpages to countless morning show segments on cable and network news, to a bevy of tweets and blog posts, the story is everywhere.

But what’s next? Here’s a look at a few of the upcoming storylines:

• Was it handled correctly on-air? The snap judgment storyline will be about Letterman’s decision to tell the whole 10-minute “little story” on air, with jokes laced throughout the entire segment. Some, like the Associated Pres headline, have dubbed it a “brilliant hour of TV.” Still, Slate‘s headline makes very clear their position: “Letterman: Watch Me Make Light of Sexual Harassment.”

The audience reaction was raw and varied – at times they would applaud, sometimes there would be audible gasps. But there was also a lot of laughter. This is Letterman’s schtick – a self-deprecating, brutally honest form of comedy. But at times, the decision to make the story into a “bit” will be questioned. “Would it be embarrassing? Yes it would. Especially for the women,” he said to massive laughter. Letterman said he was going to be done talking about the story, but we’ll see.

• How does CBS handle it from here? Every story now about this will involved lines like this one: “Robert J. Halderman, 51, a longtime Emmy-award winning producer for CBS News’ 48 Hours.” (Here’s what we know about Mr. Halderman.) At a very basic level, this is an in-house crime and CBS will have to take immediate action. But CBS will also have to deal with the revelation that the boss at the Late Show is sleeping with staffers. There will likely be a review, and CBS will have statements along the way. To brush it aside would be impossible, and as the story twists and turns, the rest of the media will pick up on how CBS is handling the case.

On a side note, there’s already this post up on CBSNews.com: “Experts: Letterman Was Right to Come Clean.” (Wouldn’t it be weird if Letterman’s company wrote a story from experts who thought it was the completely wrong choice?)

• What does “extramarital” really mean? As sleazy as both the extortion and the staff affairs sounds, the timeline here does matter. Letterman had a longtime girlfriend Regina Lasko since 1986, who he married in March of this year. He had a son, Harry, in 2003. So, when did these affairs take place, and at what point were they during Letterman’s longterm relationship?

Are there a different set of rules for when you’re in a longterm relationship as opposed to when you have a child with your longtime girlfriend, as opposed to being married? Well, it depends who you ask. Expect a lot of people to be asked in the days and weeks to come. 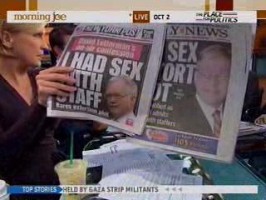 • Consensual or coerced? There’s nothing yet to indicate Letterman’s inter-office sex wasn’t consensual in the truest sense. But when you’re dealing with a boss-employee relationship, the line is that much more blurry. Donny Deutsch said on MSNBC’s Morning Joe this morning, “If one of those women raises their hand and says in reality Mr. Letterman was predatory, that’s a different story.” And Gawker’s Andrew Belonsky writes, “The fact that he screwed staffers should raise serious ethical questions, like ‘Did he use his power and influence to take advantage of the women?'”