David Mamet On Sarah Palin: ‘I Am Crazy About Her’ 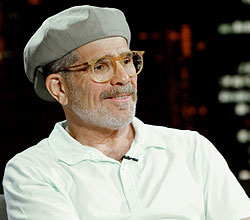 John Gapper sat down with playwright, screenwriter and director David Mamet for Slate The Financial Times to discuss, among other things, his latest project – a film for HBO about Phil Spector‘s trial – and, perhaps more intriguing, his relatively recent conversion to conservatism. The resulting interview calls to mind nothing so much as reading through a movie screenplay – it’s studded with the sort of succinct little gems movie-watchers quote to one another long after the credits have stopped rolling.

We highly suggest you take a look at the full interview but, in an attempt to whet your appetite, we’ll share a few of the most standout quotes here.

God is in the details:

We have met at the Knickerbocker because he is in New York with his producer to scout locations for a film he has written and will direct for HBO about Phil Spector, the legendary music producer. “We call it a red-booth restaurant in the movie. This is close. It’s oxblood,” he says, prodding our leather-lined booth. “We’ll have to dye it.”

“The first time I met Tennessee Williams,” he recalls, “he showed up at a party in Chicago with two beautiful young boys who were obviously rough trade. He looked at them and then he looked at me and he said, ‘Expensive habit.’ So that’s kind of how I feel about liberalism. It’s a damned expensive habit.”

Regarding one Ms. Sarah Palin:

So who would he prefer as president? He replies that he is “not current” with the Republican contenders until I mention Sarah Palin. “I am crazy about her,” he answers immediately. “Would she make a good candidate for president? I don’t know but she seems to have succeeded at everything she put her hand to.”

Here’s one for your yearbooks, would-be English majors:

“It once occurred to me: being able to write is like being the pretty girl at the party. You can’t be diffident about it because that’s a lie but it’s nothing to be arrogant about.”

This is something 50 Cent probably thinks about often:

The crux of a good Mary Shelley novel:

“He [the Spector character] talks a lot about Lawrence. He loved Lawrence. Either he loved him or I do, I can’t remember.”