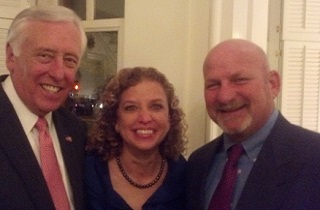 On Wednesday night, Senator Mary Landrieu (D-LA) hosted a launch party for DNC Chair Rep. Debbie Wasserman Schultz‘s new book, For the Next Generation: A Wake-Up Call to Solving Our Nation’s Problems. A spirited crowd of Democratic elected officials, pundits, and journalists turned out to celebrate Wasserman Schultz, including House Minority Leader Nancy Pelosi (R-CA), or as Sen. Landrieu called her to huge cheers at the event, “Speaker Pelosi.”

Rep. Wasserman Schultz was all smiles as she signed copies of her book well past the event’s scheduled end time of 8 pm, and even stuck around for a quick interview while she and husband “Saint Steve” Schultz waited for their Uber car.