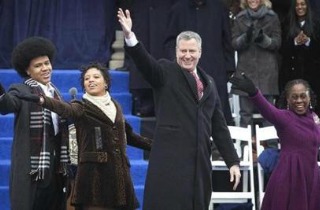 Wednesday’s inauguration of New York City Mayor Bill de Blasio was marked by a series of partisan and controversial speeches by prominent political figures. Some of the provocative remarks included singer Harry Belafonte decrying the “Dickensian” and racially unequal American justice system and a pastor tearing into the “plantation called New York City.” Even former Mike Bloomberg staffers retweeted critics who attacked the new mayor’s sharply partisan tone. On Thursday, de Blasio insisted that he is “very comfortable” with the tone his supporters struck at his inauguration ceremony.

“I am very comfortable with everyone’s remarks yesterday and I think the ceremony represented the positive aspiration of New Yorkers for a more just city,” the mayor told reporters during a press conference in which he outlined the city’s plans for coping with a winter storm.

“I think everyone who spoke at the inauguration spoke from the heart, talked about their own understanding of our city and what we need to do to move our city forward. I’m very comfortable with all that was done,” he later added.

Asked if the event could correctly be characterized as “anti-Bloomberg,” de Blasio said that he did not “accept the question as stated.”

“I made clear my real respect for Mayor Bloomberg. It’s not a secret that I’ve had some disagreements with him on policy, but I honored, with a whole heart, what he did for this city,” de Blasio asserted. “And there’s also some areas where I very much agree with him and look forward to continuing his policies.”