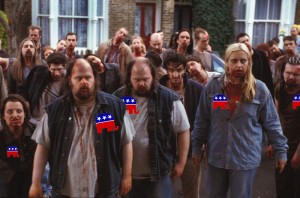 No, that headline isn’t a snide joke about voters’ ages (you know what they say, when you’re young and poor you’re a Democrat and when you’re rich and a dead person…), the deceased are actually coming after Democrats; rising from their graves and advancing on Washington while growling “SMALL GOVERNMENT! SMALL GOOOOOVERNMENT!” through their rigor mortis-afflicted mouths. Ok, not exactly, but their obituaries are sure leaning right. A few months ago, a Nevada woman’s obituary called out Harry Reid and now, a recently departed man from Georgia is borrowing the tactic to attack President Obama from beyond the grave.

The National Review Online’s Jonah Goldberg scanned in this treat from the obituary of the late Donald Charles Unsworth:

“The family respectfully asked in lieu of flowers that memorial contributions be made to the American Cancer Society or to the campaign of whoever is running against President Barack Obama in 2012.”