Debates Are Pretty Much Just Talk

Debates Are Pretty Much Just Talk 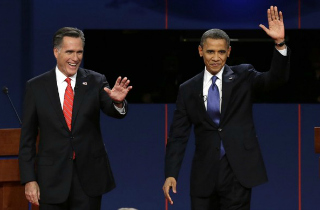 President Barack Obama opened up the debate last night by wishing the First Lady a happy 20th anniversary. Well let’s hope he has a short memory. Because I’m sure he wouldn’t want to celebrate subsequent anniversaries remembering this debate performance. It was flat, passive, unemotional, and ineffective. In short: Pres. Obama’s performance raised nearly as many questions as Mitt Romney’s gaffe-prone campaign. But let’s not go overboard. This didn’t change the race and it won’t change the election. Nor will future debates. (According to Nate Silver of the blog FiveThirtyEight, if the election were held today Obama would win with 330 electoral votes and he has a 96 percent chance of winning.) The more pertinent question isn’t who will win — but by how much?

Debates rarely provide enough momentum to affect the calculus of elections. For one thing, a candidate has to have a campaign proficient enough to take advantage of a win and drive a central theme home. It’s hard to picture a campaign incapable of that task pre-debate but mastering it post-debate. Second, debates happen late in the game. We’re less than five weeks out and over half the country have already begun early voting. Third, those most likely to watch debates are those most attuned to the long, drawn-out nature of presidential races. They’ve had plenty of time to make a decision and have mostly made their up their minds. (A Gallup poll shows that roughly 83% of Obama and Romney supporters said that nothing said in debates could possibly change their decision.)

Winning the debates won’t put an election in the win column. But victories can help (in small measure) lead to routs, and losses can temper them.

Case in point: In 1988 during the second presidential debate between George H.W. Bush and Michael Dukakis, the moderator Bernard Shaw famously asked Dukakis if he would support the death penalty if his wife were raped and murdered. Instead of stating the obvious, Dukakis rambled about the probability of that happening. All that did was reinforce the perception that Dukakis was a mealy-mouthed liberal who had no sense of law and order.

And the timing could not have been better for Bush. Just a week prior to the debate his campaign had started airing not only the single most damning political ad of the race — but one that is regarded as one of the most effective political ads ever created. Titled “Revolving Door,” it centered around the Massachusetts prison furlough program which allowed prisoners weekend home visits. The impetus for the ad was a man by the name of Willie Horton, who was convicted of robbery and murder, and subsequently violated his furlough and committed rape and murder. The ad made it clear that via the furlough program violent prisoners were set loose to wreak havoc, and Dukakis dragged his feet to stop the practice. That Horton was black and “menacing” was just icing on the cake. He wasn’t even mentioned in the ad. But by the time his name was spoken almost every voter had heard about the furlough program.

George H.W. Bush used the debates to effectively hammer Dukakis on his lack of leadership and amateurish and dangerous view on law and order. It was a central theme in his campaign and the debates just helped him to close the case leading up to the election. Bush went on to win by a landslide of 315 electoral votes, surprisingly underperforming in some rural areas but overperforming in suburban areas, in part thanks to his focus on crime and punishment for which he became known.