Debunking the Muslim Clock Kid and the Obama Block Kid

Debunking the Muslim Clock Kid and the Obama Block Kid 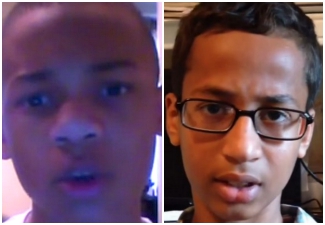 There was a time when debunking a 13 or 14 year-old boy entailed demanding a photo of his Canadian girlfriend, but the times, they are a-changing. This past week has brought us two teens who became the subjects of related national news stories, only to become the targets of media naysayers and skeptics.

First, there was Ahmed Mohamed, the Texas teen who scored a White House invite after he was arrested for building a clock that nobody ever thought was a bomb, and then there was CJ Pearson, the Georgia teen who claimed President Obama blocked him on Twitter after Pearson blasted Obama on YouTube for inviting the first kid, Ahmed, to the White House. Both kids had their stories scrutinized last week, and the results are fascinating.

Ahmed’s story immediately became a rallying point for the pro-Muslim-tolerance left, which immediately glommed onto it as an example of racist police and teachers making assumptions about a Muslim-looking kid. Almost immediately, though, some conservatives reflexively attempted to justify the teen’s arrest, and were quickly joined by members of the anti-Muslim left. The backlash against Ahmed took several related and unrelated tracks, most of which I ignored, until I saw that my friend Dave Weigel, whose judgment I trust, declared himself an “Ahmed skeptic.”

First, there were those who essentially conceded Ahmed’s version of the story, but who felt that an abundance of caution justified (or partially justified) the reaction. For Bill Maher, that justification was enhanced by Ahmed’s Musliminess, but even a bleeding-heart lefty like me had to admit that Ahmed’s clock was at least as alarming as a Pop Tart. Some of these folks also jumped on President Obama’s invitation as divisive and ill-considered.

Obama’s invitation is a matter of taste and opinion (one with which I agreed) but the idea that the cops and the teachers were justified in their actions ignores the crucial fact that, however viscerally alarming the clock’s appearance was, no one involved ever actually believed it was a threat. If they had evacuated the school, detonated Ahmed’s clock using a bomb squad robot, and then interrogated the kid, I’d buy the abundance of caution argument. I would expect no less from teachers at my kids’ school if they even remotely suspected that there was a bomb in their classroom, even if it was a tiny bomb with a timer and no bomb-y stuff attached to it.

Then, there was the criticism that Ahmed kept saying he “invented” this clock, when really all he did was transplant the guts of some other clock into a pencil box that looked like a briefcase. It was this critique that Weigel cited, retweeting a link to a very thorough article describing just how Ahmed had probably accomplished the feat, right down to the model of clock Ahmed probably used. Iconic atheist Richard Dawkins also floated this critique on Twitter, and Maher cited it on his show Friday night.

For all the difference it makes, I’m almost prepared to concede this point, but not quite. I’ve heard Ahmed talk about “building” the clock, which he clearly did, and I don’t know exactly how many times he referred to it as an “invention,” but let’s say he did it a lot. You can actually take an existing product, modify it, and get a patent for it, depending on how novel and useful your modification is. This might not fit the commonly understood definition of “invention,” but it does qualify. In Ahmed’s case, he made a clock that allows you to see what goes on inside it, an improvement whose utility and novelty are at least open to debate.

But let’s give the skeptics this one, for the sake of argument, and concede the underlying premise, that this clock was nothing to really brag about, which is central to Ahmed’s reasoning for bringing it to every class and showing it off. The skeptics’ theory of the case is that Ahmed deliberately made something that he hoped would be mistaken for a bomb, thereby proving that he’s an oppressed minority victim who should get invited to the White House. This idea has attracted strange bedfellow Sarah Palin to the Dawkins/Maher side of the argument, although Dawkins, at least, pays lip service to the idea that the police should not have taken the bait.

Here’s where I find at least a little bit of plausibility. According to Mark Cuban, who heard it from a friend, Ahmed showed his clock off in six different classes, but clammed up when his English teacher said it was “making people nervous.” I think it’s likely that Ahmed perceived this to be his teacher calling attention to his Musliminess, rather than genuine concern over the clock, because she asked him to put it in his backpack, instead of immediately evacuating the school. If he was, indeed, slow to respond, it might have been out of the shock and hurt that he’s expressed in multiple interviews.

It’s possible that Ahmed deliberately set this whole thing up as a sociology experiment, and was just waiting for this sort of reaction so that he could watch it play out. That still makes him innocent of building a “hoax bomb,” since there was no mock explosive attached to the clock, and he never implied or intimated that it was anything but a clock, and it still makes the cops and teachers guilty of either underreacting to something they unreasonably believed to be a bomb, or overreacting to something they knew wasn’t a bomb.

The main difference here is that I like the racism-sting-snaring version of Ahmed even more than the wide-eyed one that everyone was standing by. What a pleasure and a blessing it would have been if that Ahmed’s teachers and local police had taught him a lesson by not falling into his “trap.” At worst, Ahmed is guilty of being a wiseass who was proven correct, rather than a naif who was proven wrong.

That brings me to CJ Pearson, whose claim to have been blocked on Twitter by President Obama has been pretty thoroughly debunked by conservative website TheBlaze.com, and whose skeptics also include Dave Weigel. Weigel traces Pearson’s rise to conservative stardom and previous brushes with bogus victimhood, and scrupulously details TheBlaze writer Oliver Darcy’s destruction of Pearson’s latest claim, but the really fascinating thing about this is how Pearson has reacted to it all.

I’m not going to sit in judgment of a 13 year-old who is dealing with pressures I can’t possibly know about or understand, but it is crystal clear that his claim to have been blocked is just not supported by the facts, or even his own statements. The rant that Pearson wants us to believe got him blocked is similarly fact-free, although no more so than his grown counterparts. What’s fascinating about Pearson is that he knows this means nothing to his audience, and he’s exploiting that to the hilt. After he changed his story to Darcy, Pearson rallied his believers on Twitter, and tried to cast Weigel’s and Darcy’s interest in the story in an unsavory light, tweeting and retweeting things like this:

.@oliverdarcy @POTUS thanks for sharing updates of my daily activities. Truly means a lot even though your description is off,

@daveweigel picks fights with teenagers. No wonder the Washington post is such an absolute embaresment. @thecjpearson — Mark Anderson (@MarkOleandy77) September 26, 2015

Washington Post is so sad now, even if @DaveWeigel emails hoping @thecjpearson dies leak, no editors work there, so he couldn’t be fired.

Now, that’s some world-class cynicism right there. As Weigel noted on Twitter, he was following up on the story because Pearson is connected with the Ted Cruz campaign (Pearson is the National Chairman for “Teens for Ted” coalition), and his rant/fake Twitter block have become huge national news stories, but Pearson knows that his audience is immune to facts. You could almost admire that kind of savvy if it weren’t so toxic.

I’d like to think the best about CJ Pearson, and hope he’ll grow out of this in a few years like Jonathan Krohn did. For now, though, I’ll take Ahmed Mohamed, even on his worst day.