Dem Rep. John Lewis: ‘I Fear for the Future of This Country’ Because of Garner/Ferguson

Dem Rep. John Lewis: ‘I Fear for the Future of This Country’ Because of Garner/Ferguson 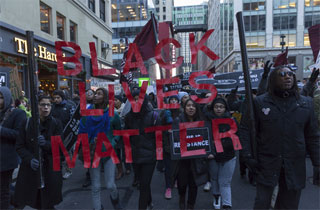 On the 50th anniversary of the March on Selma, civil rights icon and Congressman John Lewis (R-GA) grimly predicted that America was headed towards violence if racial relations don’t change: “If the fires of frustration and discontent continue to grow without redress, I fear for the future of this country.”

Writing in The Atlantic in the wake of the Eric Garner and Michael Brown grand jury decisions, Rep. Lewis noted a “growing discontent” in America, and, as one of the organizers of Selma, wondered if things had changed since then — or if they’d grown worse:

Soon the nation will celebrate the 50th anniversary of Bloody Sunday, the day unarmed, nonviolent protestors were brutalized by deputized citizens and Alabama state troopers on the Edmund Pettus Bridge. As a leader of that march, I wonder, if the same attack took place in Ferguson today, would Americans be shocked enough to do anything about it? What has happened to the soul of America that makes citizens more interested in justifying these murders than stopping them?

Dr. King declared in his 1967 speech, “Racism is evil because its ultimate logic leads to genocide …. It is an affirmation,” he said, “that the very being of a people is inferior,” and therefore unworthy of the same regard as other human life. Do Americans accept the deaths of hundreds and thousands of young men and boys simply because they are black? Ignorance of their day-to-day lives is no excuse for what is done in society’s name.

In the presence of injustice, no one has the right to be silent. Members of government and the business, faith, and even law-enforcement communities must stand up and say enough is enough. Let the young lives of Michael Brown, Eric Garner, Sean Bell, John Crawford, and Trayvon Martin serve a higher purpose to shine the light of truth on our democracy and challenge us to meet the demand for equal justice in America.

Nevertheless, Rep. Lewis called for the protests to continue. “At its best, non-violent protest is a strategically engineered crisis designed to wake up a sleeping nation, to educate and sensitize those who become awakened, and to ignite a sense of righteous indignation in people of goodwill to press for transformation,” he argued. “That’s what the protests galvanized by the deaths of Michael Brown, Eric Garner, Trayvon Martin, and others are trying to accomplish.”

The rest of the essay can be read over at The Atlantic.