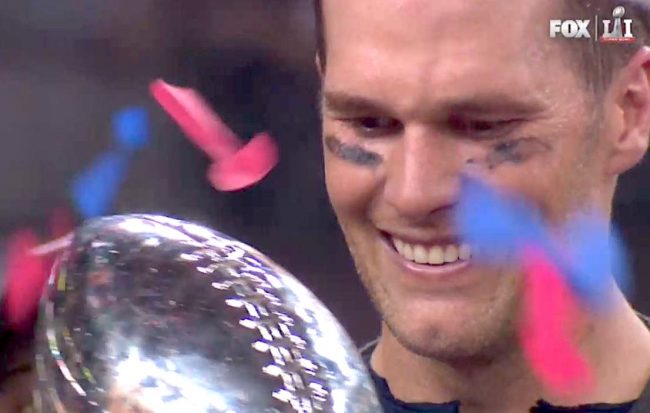 The NFL’s season of declining ratings concluded with a Super Bowl that, once again, was down from the previous year.

Via multiple reports, Super Bowl LI between the New England Patriots and the Atlanta Falcons pulled down a 48.8 overnight rating and 72 share, down from the previous two editions of the big game.

Super Bowl XLIX in 2015 between the Pats and the Seattle Seahawks notched a 49.7 overnight. While last year’s game between the Denver Broncos and the Carolina Panthers got a 49.0 overnight.

It is likely that the Falcons running out to a seemingly insurmountable 28-3 lead did not help the final numbers. Social media buzz certainly helped bring some people back to their sets for the game’s dramatic conclusion. But apparently, it was not enough to top the last two Super Bowls.

One interesting note from Fox Sports vice president Michael Mulvihill: According to the early data, Lady Gaga’s halftime show actually drew a larger audience than the game itself. The halftime show garnered a 50.0 overnight, more than a full point higher than the game. Mulvihill reports that this is the fourth consecutive year that the halftime show out-rated the game.

50.0 overnight rating for the SB halftime with Lady Gaga. If it holds up in final ratings, will be 4th straight year halftime outrates game.

Final ratings numbers are set to be released later. We will update this post as the new data comes in.