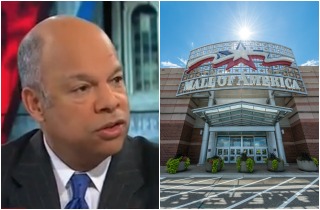 Somali militant group al-Shabaab released a video over the weekend threatening new attacks. As a result, shopping malls nationwide — most notably, the Mall of America in Minnesota — are ramping up security efforts. The video refers to the Westgate mall attack in Nairobi, Kenya, in 2013 that claimed 60 lives, for which al-Shabaab claimed responsibility.

“If just a handful of mujahideen fighters could bring Kenya to a complete standstill for nearly a week, imagine what a dedicated mujahedeen in the West could do to the American or Jewish-owned shopping centers across the world,” a man said in the video, according to USA Today. “What if such an attack was to occur in the Mall of America in Minnesota? Or the West Edmonton Mall in Canada? Or in London’s Oxford Street?”

Mall of America released a statement acknowledging the threat and the presence of heightened security.

“We will continue to monitor events with the help of federal, state and local law enforcement agencies. As always, we take any potential threat seriously and respond appropriately. Mall of America has implemented extra security precautions, some may be noticeable to guests, and others won’t be. We will continue to follow the situation, along with law enforcement, and will remain vigilant as we always do in similar situations.”

Johnson said public awareness of the threat and cooperation are both “critical,” and believes Americans are still free to “associate” in public places. When asked if the Mall of America is safe today, Johnson said anybody who plans on going there needs to be “careful.”