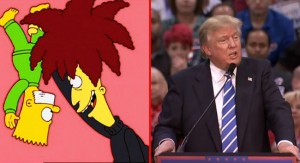 Bill Oakley said as much (and more) in a recent interview with The Daily Beast that discussed the history of “Sideshow Bob Roberts,” a politically-themed episode that aired on Oct. 9, 1994. Of course, he doesn’t literally believe the show predicted Trump, but the similarities are uncanny.

“The masses now behave a little bit more like the population of Springfield than they did back then,” Oakley said before adding: “The political discourse now is way more fucked up than the one depicted in the show.”

In the episode, Sideshow Bob (voiced by Kelsey Grammer) is serving time in prison for his many crimes — included the attempted murder of Bart Simpson. A Rush Limbaugh-esque character named Birch Barlow champions the convict, whom he calls a “political prisoner” of the “liberal justice system,” and calls upon the citizens of Springfield to call for his immediate release.

After Sideshow Bob leaves prison, Springfield’s Republican party decides to nominate him as its mayoral candidate and supports his efforts against the incumbent, Mayor Joe Quimby. Throughout, jokes are made at the expense of both political sides, though Oakley doesn’t hide The Simpsons‘ obvious liberalism.

The episode is generally outrageous, especially when it lampoons All the President’s Men — complete with Bart and his sister Lisa‘s investigation and Waylon Smithers‘ turn as the infamous “Deep Throat.”

As for whether or not a similar treatment could be done of Trump today, Oakley remains skeptical.

“It’s certainly hard to make it any more outrageous than real life,” he said.