Did the Media Jump the Gun on the Jussie Smollett Story? 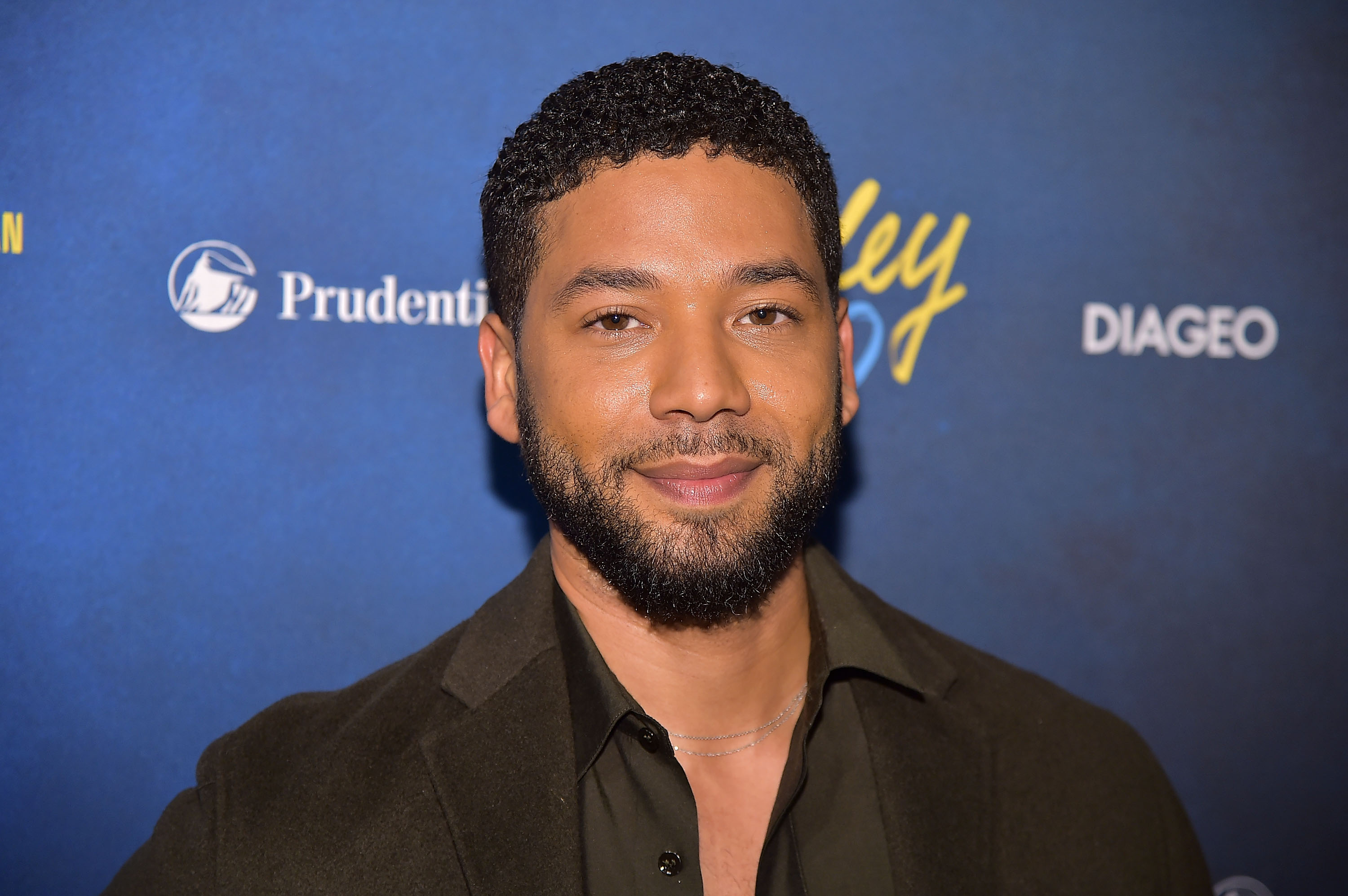 In light of new details in the investigation of the alleged assault on actor Jussie Smollett, fingers have been pointed at “the media” for jumping the gun on the story.

In pushing back against that, there is an emerging effort to draw distinction between rapid fire activists and celebrities on social media, and members of the press.

Twitter often blurs “the media” into a blob of celebrities, pundits, and randos, and it does a disservice to the reporters who covered this story the right way. https://t.co/oIabRr00Lk

On CNN’s Reliable Sources, Vox’s Liz Plank emphatically made this point, saying she couldn’t find “a real reputable media outlet reporting” that the attack was motivated by MAGA or included a statement about “MAGA country. “I couldn’t find one,” she said. “We can’t confuse celebrity tweets with the media and the press.”

This is a fine idea, and there should be some distinction when referring to the media at large, but in this case the facts simply don’t bear out the premise that the press was not involved in an early pile-on. In fact, dozens of reporters Tweeted these very things, on the day the story broke.

These are only some of the examples. Take a look at these reporters/members of the press/journalists, from… 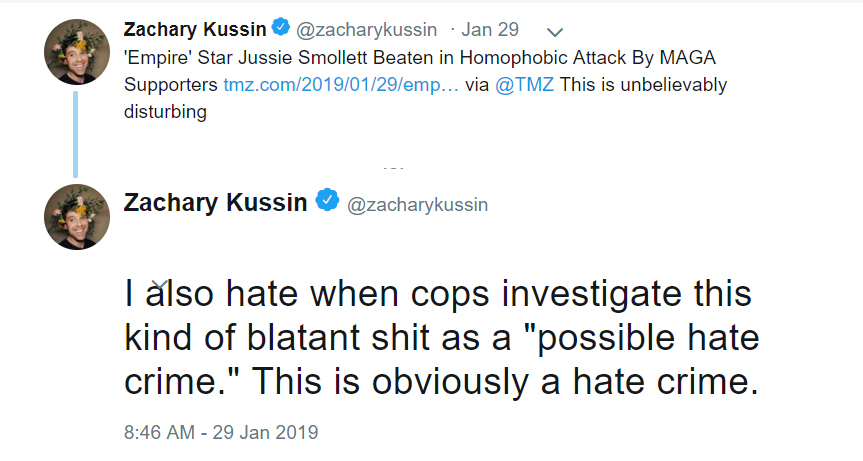 ‘EMPIRE’ STAR JUSSIE SMOLLETT VICTIM OF HOMOPHOBIC ATTACK
By MAGA Supporters: “We’re told when he walked out, someone yelled, ‘Aren’t you that f***ot ‘Empire’ n*****?'” https://t.co/k7wWrh3H86

Senior Reporter at the Daily Beast:

Update after learning more: they wore ski masks, so as to cowardly not be recognized as they shouted “this is MAGA country” and toed a rope around his neck like a noose. 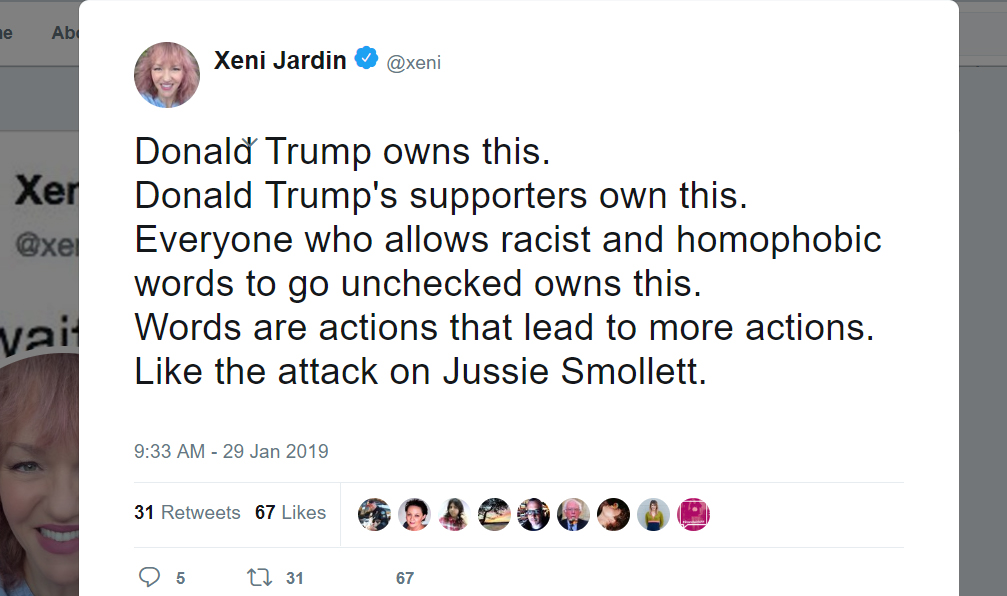 Trump MAGA supporters came after a Black gay man with a noose in Chicago.

They yelled “This is MAGA country.”

And that’s how far we haven’t come in 2019. Hoping for justice & vengeance for @JussieSmollett.

Now who is going to defend Black LGBTQ…https://t.co/8gOXR1bzXK

Producer for Nightline on ABC News.

Contributor to Forbes and Slate.

The rabid animals in MAGA hats who attacked Jussie Smollett need to be hunted down aggressively, w/o mercy, & assuming on-sight that they’re armed & an imminent threat. Drag the scum in chains to the smallest darkest hole, and throw them down it forever.

The attackers reportedly yelled “This is MAGA country” as they beat Smollett and wrapped a rope around his neck. https://t.co/0t13akIDS7

Editor at the LA Times. 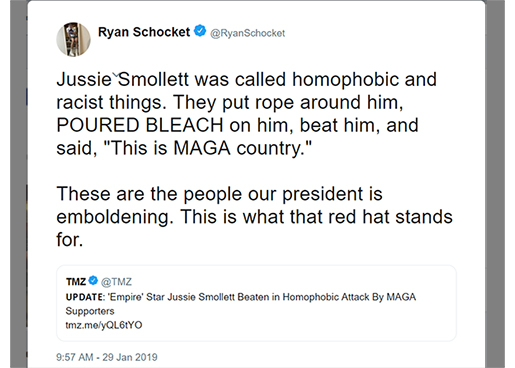 (Above updated to image, tweet was deleted after this was published.)

We told you these things would happen with the rise of trump. He has emboldened his followers to commit acts of violence against racial, ethnic, and sexual minorities. What a disgusting man and political party to identify with.

People say that wearing a MAGA hat doesn't mean you're racist or homophobic. The men who attacked Jussie Smollett wore MAGA hats. The Covington boys wore MAGA hats. It's Making America Great Again only for straight white males. Those hats are all about upholding the patriarchy.

#Empire’s Jussie Smollett was violently assaulted in Chicago by 2 men yelling racial & homophobic slurs. They dumped an unknown chemical on him, stated ‘This is a MAGA country’ & wrapped a noose around his neck. They were trying to lynch him for being an LGBTQ+ person of colour. pic.twitter.com/5lp2l68bZd

The people who say LGBTQ Americans should be thankful they don’t live somewhere like Saudi Arabia need to pay attention to the details of this story.

America is not safe for queer people — especially if they are POC.

My heart goes out to @JussieSmollett. You’re an inspiration. https://t.co/7A9efcJ36G

Have the MAGA ghouls who put Jussie Smollett in the hospital been invited to the White House yet?

That MAGA violence targeting Jussie Smollett is particularly horrifying because it’s not new.

Regarding the heinous attack on @JussieSmollett, yet another reminder that Trump’s ascendance and the resulting climate of hate has meant that lives have been increasingly at stake since 2015.

Smollett could have been killed by those thugs screaming MAGA. Let that sink in.

From the Chicago local press, which was brought up in the discussion over Dave Weigel’s tweet as well as in the CNN discussion…

The two men — both white and wearing ski masks — viciously attacked Smollett as he fought back, but they beat him badly and fractured a rib. They put a rope around his neck, poured bleach on him and as they left they yelled, "This is MAGA country." https://t.co/UQtk9HWrAq

And this from Rawstory.

That one was shared, with headline, by this guy, who writes about the spread of fake news:

Here are a few freelance journalists.

This is horrific. Absolutely horrific. I am in tears over this. ‘Empire’ Star Jussie Smollett Beaten in Homophobic Attack By MAGA Supporters | https://t.co/pDzSH1NIj3 https://t.co/eqkixDyerx

OMFG! “”Empire” star Jussie Smollett was brutally attacked by 2 men who beat him up, put his head in a noose and screamed, “This is MAGA country.””

This MAGA shit is getting worse! https://t.co/tJQ05cNJKE

Can’t believe it. Jussie Smollett fell victim to a #hatecrime this morning in Chicago. Here are the details on his attack by MAGA supporters: https://t.co/qukbWw42ZO

Another factor that’s not addressed is media who retweet or share the tweets from celebrities and activists. There were a lot of famous people tweeting that day, including politicians, and members of the media shared their tweets.

Trump’s America: “Empire” star Jussie Smollett was brutally attacked by 2 men who beat him up, put his head in a noose and screamed, “This is MAGA country.” https://t.co/eewZF1i8Fp

The hate Trump emboldens: “Empire” star @JussieSmollett was brutally attacked by 2 men — both white and wearing ski masks. They put a rope around his neck, fractured a rib, and poured bleach on him and as they left they yelled, “This is MAGA country.” https://t.co/lRRO7MgJuX

A writer for Full Frontal with Samantha Bee and The Daily Show:

If only congress had funded that wall to protect Jussie Smollett from the white terrorists who broke his rib, called him n****r and f*ggot, poured bleach on him and put a noose around his neck while shouting “this is MAGA country”.

The above-mentioned commentary from a Vox contributor were said on CNN’s Reliable Sources. Here are some CNN tweets.

TMZ: “Empire” star Jussie Smollett was a victim of racist, homophobic hate crime attack. The two white men called him a “faggot” and a “nigger,” put a rope around his neck, poured bleach on him and yelled, “This is MAGA country.” https://t.co/iwHkNITZbk

This one, since deleted. 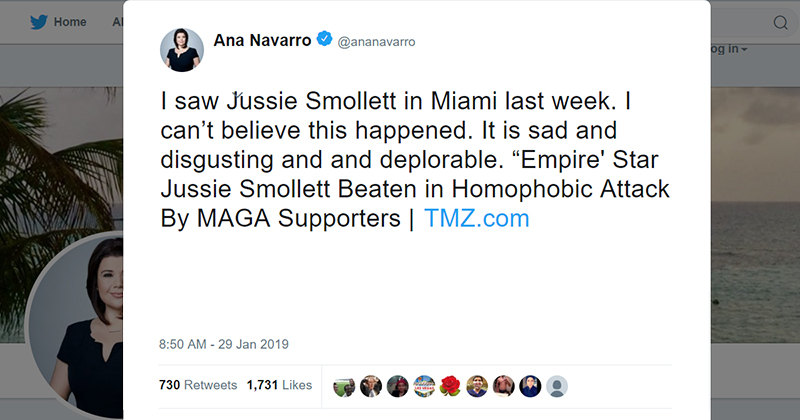 This attack on @JussieSmollett is a hate crime and should be treated as such! https://t.co/X7nvpycpiL

April Ryan is, of course, a very high profile White House correspondent for Urban Radio Networks, and is a regular contributor on CNN. That’s not second-guessers or critics blurring a line, that’s a journalist doing the thing that we’re being told they didn’t do.

Mara Liasson of NPR appeared on MediaBuzz on Fox News to talk about the media reaction with Howard Kurtz. The two discussed the difference between jumping the gun and simply reporting on the latest information, and there is a difference. Liasson and Kurtz also it would be equally irresponsible to jump the gun now and declare the Smollett case decided in the other direction. Absolutely true, and collecting the above tweets does not imply otherwise. But it does show that the notion that members of the press were studiously avoiding piling-on after the TMZ story broke are simply not correct. Many, many, many did.

There is a big push to fight fake news by naming, shaming, and driving off of social media those would propagate it. Usually these are far out there people like conspiracy theorist Alex Jones, who is by no stretch a journalist. This push is on the grounds that the influence and ability to spread false info are damaging and should be stopped. Yet here, there is an effort to say it doesn’t matter what someone famous says, only what a journalist says.

Much like Kmele Foster on CNN, over on FNC, Mara Liasson’s advice to reporters was “just wait before you tweet.” Sound advice for anyone.