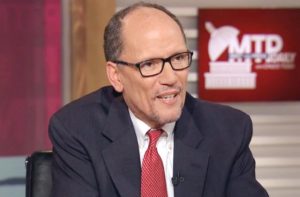 The Democratic party still doesn’t understand why it lost the 2016 presidential election, and why it’s lost state legislatures and gubernatorial offices across the country.

The proof of this lies in Democratic Congressional Campaign Committee Ben Ray Luján‘s latest comments to The Hill, promising that the DNC will fund Democratic candidates who oppose abortion.

“As we look at candidates across the country, you need to make sure you have candidates that fit the district, that can win in these districts across America,” he said.

It should be obvious, from a moral standpoint, what’s wrong with this. Women’s human rights aren’t a bargaining chip for votes. Candidates who don’t respect women, who think the state has the authority to control their bodies and most personal choices have no business receiving funding or support from a party that claims to respect equality and fight for everyone.

But just from a strategic standpoint, the policy is equally flawed and shortsighted. First and foremost, as states across the country continue to pass terrifying amounts of restrictions on abortion, leaving women in poverty and rural areas with virtually zero options and doing a number on the nation’s maternal mortality rates, the situation is only going to get worse for women if we elect anti-abortion Democrats whose stances will greatly worsen their living conditions. The party can expect to lose the votes of thousands of women who may have voted Democrat, only to be failed by anti-choice Democratic lawmakers.

But frankly, the problem with this strategy goes way beyond losing the women’s vote or damaging the Democratic party’s reputation. It completely misses the point of why Democrats are losing, which actually has nothing to do with their candidates having the audacity to support women’s human rights.

Democrats aren’t losing because they support abortion — they’re losing because they’re not getting people out to vote. In recent years, their move toward the center and offering of centrist candidates has alienated many marginalized people who, if anything, don’t think they’re being radical enough as is. The reason red states are red isn’t because these views are necessarily the majority — it’s because voter turnout rates in Texas, Oklahoma, Arkansas, and so on and so forth are some of the lowest in the country.

If Democrats want to start winning again, they should ditch their neoliberal austerity politics and take a page from the conservative Tea Party movement — that is, move farther left, get louder, fight for tuition free education and universal health care and unapologetically support abortion rights and public funding for abortion, go door-to-door and talk to left-leaning people, to marginalized demographics, learn why they’re not voting, and get them to vote.

The reason Hillary Clinton lost a number of states that Barack Obama won isn’t necessarily because all the progressives and minorities and women who lived in those states when Obama was running just disappeared and were all magically replaced by racist, sexist “deplorables” — it’s because Clinton and her campaign team failed to get them inspired enough to go to the polls. And the sad reality is that perhaps she would have been able to, had her policies appealed more to the more left-leaning voters, to voters who feel alienated and underrepresented.

And, of course, on top of this, while Democrats are already doing a decent job of trying to fight voter ID laws that disproportionately keep people of color and trans people unable to get updated identification from voting, there’s the fact that the people who tend to be unfairly prevented from voting are more likely to vote Democrat.

It would behoove the party to put more effort into dismantling these laws and strengthening voting rights across state lines, and also put effort into helping people to get their necessary IDs, or get transportation to the polls, or help Americans access fairer working conditions that allow them to take some time off to go vote — and less in trying to win over anti-woman voters.

Ultimately, moving to the center, ditching “identity politics” — also known as caring about the living conditions of people of color, the LGBT community, and women — and compromising on abortion rights, healthcare, the minimum wage, and a host of other issues, are hurting, not helping Democrats. The sooner party leaders are able to recognize that centrism will get them nowhere, the better — for themselves, and for all Americans, really.