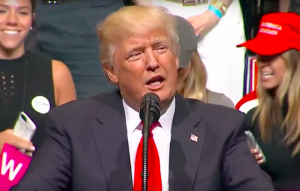 Two years ago, President Trump launched his campaign by introducing his hard stance on immigration, calling undocumented immigrants “rapists” and killers. Last week, he held a rally where he called them “animals” who “slice and dice” teenage girls.

There’s a common thread here — rape and violence against women matter to Trump and his supporters, when they can use female victims and exploit their narratives to unfairly demonize immigrants, who are statistically far less likely to commit crimes, according to objective research.

Nothing makes this clearer than the silence of Trump and his supporters, who are suddenly fanatical women’s rights advocates when it gives them an excuse to blow off racist dog whistles, in the face of a Thursday report that an anti-immigrant group is involved in human trafficking.

Defend Europe, an anti-immigrant group that attempts to disrupt humanitarian search and rescue missions in the Mediterranean Sea, recently chartered a boat that was stopped in a Cyprus port, where several members were arrested for forging documents and engaging in potential human trafficking. Since then, pro-Trump media trolls associated with the campaign have been conspicuously silent.

The members were stopped in and deported from a sea port in the self-declared Turkish state of Northern Cyprus Thursday after spending two days in detention for document forgery and potential human trafficking of 20 Sri Lankan nationals who were aboard the C-Star, the campaign’s ship. Turkish Cypriot authorities deported nine crew members, including the ship’s captain and a German “second captain” believed to be neo-Nazi Alexander Schleyer.

Media Matters also reports that Defend Europe advocates for forcing migrants and refugees from Libya back to where they came from.

In either case, the same report detailed a number of Defend Europe supporters, many of whom are immigration hard-liners who have vocally expressed Islamophobic views. They’ve all held silent on this latest scandal, and noticeably, so has President Trump. Can you even imagine what his Twitter would look like if a pro-immigrant rights group were caught doing something like this?

Of course, the reality is that on both sides of the aisle, we all tend to selectively pay attention to negative scandals attached to groups we oppose, while looking the other way when the tables are turned. But this situation is so desperately unique, because it lays bare so perfectly how little Trump and his supporters really care about women’s rights and safety.

They care about pushing an anti-immigration agenda, and they’re willing to pull out any rhetorical tactic in the book to do so. Because, really, that’s all that concern for young women and rape victims is to them — a rhetorical tactic.