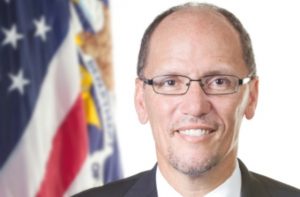 Following House Minority Leader Nancy Pelosi‘s comments that abortion rights are a “fading issue” and Democrats ought to be open to voting for anti-abortion candidates, as well as Vermont Sen. Bernie Sanders‘ endorsement of an anti-abortion mayoral candidate, DNC chair Tom Perez on Tuesday met with Democrats for Life at the DNC headquarters in Washington.

At the meeting, Perez listened to a list of aggressive demands from the group of anti-abortion Democrats, who are asking the DNC to remove its goals of widening access to abortion and repealing the Hyde amendment, which prohibits federal funding from paying for abortion with few exceptions. The group is also asking that the DNC explicitly state that it will support anti-abortion candidates.

“Our party has always welcomed different opinions on several issues and Tom is committed to listening to all Democrats as we work to rebuild our party,” DNC spokeswoman Xochitl Hinojosa said of the meeting, in a statement.

The meeting, which is the latest move from Democratic party leaders to distance the party from advocacy for abortion rights, signals an alarming, implicitly anti-woman trend among “progressive” leaders.

Hillary Clinton‘s loss in the 2016 election sent a clear message — the Democratic party had some changes to make. To some leaders wary of regions in the United States where abortion is a make-or-break issue, this means compromising on a fundamental human right, bargaining away women’s control over their bodies for just a shot at winning a few more votes.

This, of course, ignores how around the country, the vast majority of Americans support abortion rights, and it certainly doesn’t help that this trend is taking place at the same time as unprecedented attacks on birth control and abortion access in states across the country.

New bans, restrictions, geographic and financial barriers have decimated access to abortion, especially for low-income women in rural areas where some states have only one clinic remaining, all while slashes to Planned Parenthood funding are limiting access to birth control and sexual health education, too.

Not to mention how the existence of the Hyde amendment has barred women from controlling their bodies for the past four decades, all to not offend the personal beliefs of a minority of Americans.

So much for abortion being a “fading issue,” Pelosi.

Of course, passivity and dismissal of abortion rights as merely an issue that can be peacefully disagreed upon, rather than the livelihood and dignity of women across the country, has been a problem with progressives long before Pelosi, Sanders, and Perez. But the problem was arguably exacerbated by the rise of Bernie Sanders and with him, the awakening of the “Bernie Bro.”

As a quick disclaimer, I voted for Sanders in the California primary last year, and the last thing I’d ever call him is “anti-woman.” Economic justice is an intersectional issue that has the power to expand on the rights of people of color, immigrants, the LGBTQ community, and of course, women.

But contrary to what many “Bernie Bros” and even Sanders himself, seem to believe, economic justice is far from a cure-all. Just because women have jobs and are able to attend college, that doesn’t mean attacks on their reproductive options are going to magically disappear.

Women vote — and they aren’t going to appreciate being thrown under the bus.

And at the end of the day, let’s also not forget that economic justice and reproductive justice are inextricably bound. A woman lacking the resources to control her body will fall behind her male peers, whether she’s in school or the workplace. That’s a matter of objective fact and one that Sanders, Pelosi, and Perez had better get behind unless they want to lose half their base.