Does Time Know What Business Journalism Is? 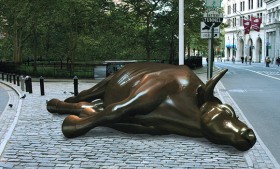 In an article in this week’s Time titled “Business Journalism: A Vanishing Necessity?” Belinda Luscombe uses the recent demise of Portfolio and the current financial struggles of BusinessWeek as some sort of measure that business journalism itself is under threat

There is more interest, argument and passion surrounding the condition and future of American business than there has been in several generations. And yet, in the space of three months, two business magazines — the organs that exist to offer the stuff people are clamoring for — have been abandoned. One, Portfolio, a newbie, was closed. The other, BusinessWeek, an old stalwart, is up for sale, according to reports that caught even the magazine’s own editorial staff by surprise.
*
So while ad pages are plummeting for all magazines, they’re flirting with terminal velocity for business titles.

Perhaps Time needs to widen its definition of “business journalism.” It’s certainly not news that business magazines are having a rough ride at the moment, along with the rest of the magazine industry (or that Portfolio might have remained viable if Conde Nast had invested a little its online property) . But business journalism? That’s a bit of a stretch.

A quick glance at the Print / Online Reporters category of our Power Grid tells a slightly different story. Andrew Ross Sorkin, the NYT star business reporter, ranks #1; James Surowiecki, the New Yorker‘s business writer is #10; John Carney of The Business Insider is #21. While we’re on the subject, we’re told TBI averages 10 million monthly visits — not very terminal! It’s safe to say none of these people appear to be vanishing.

Neither does Michael Lewis, who recently left a plum contract with Portfolio for an even richer one with Vanity Fair — his article “The End” about how Wall St. met it’s demise last fall, was one of the most passed-around articles of last year. And then there’s Matt Taibbi, the Rolling Stone journo who’s turned his attention from politics to the business of Wall Street and whose two most recent articles on the subject — “The Big Takeover” and “Inside the Great American Bubble Machine” — have created some pretty significant waves inside and outside the business community (Our own business columnist, Jim Impoco, has written about both of them.)

All of which may lead the casual business reader to conclude that while BusinessWeek is in tough shape (and, in fact, this is really as far as the article reaches) business journalism itself is actually thriving, or at these those writers who were able to adapt their writing platforms to ones which were able to keep pace with the story itself.