Donald Trump has been at the center of a sustained media barrage over his repeated claims that he witnessed thousands of Muslims in Jersey City celebrating as the Twin Towers fell. Recently, Ohio Governor and Republican presidential hopeful John Kasich released an ad slamming Trump over an outcropping of that controversy, namely Trump’s mockery of a reporter’s disability. The ad, entitled “Is he worthy?”, ends with an intriguing question:

“Is someone like Donald Trump really worthy of following in their footsteps?”

In order to properly consider that question, you have to think like a Republican voter, so just ignore all those photos of history randos. The question is really about Ronald Reagan. On pretty much every count that matters to a majority of the Republican base, Trump runs circles around Reagan.

For example, everyone knows that Ronald Reagan kicked off his 1980 general election presidential campaign with a speech on “states’ rights” in Philadelphia, Mississippi, where three civil rights activists were murdered in 1964. This was a fairly obvious appeal to white resentment, and perfectly in character with Reagan’s familiar use of “welfare queens” and t-bone steak-buying “young bucks,” but Reagan’s entire career of dog-whistling can’t hold a candle to Trump’s campaign kickoff. 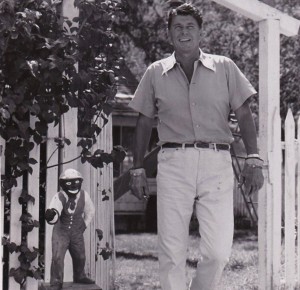 Trump ran Reagan’s appeals to white panic right through a decoder ring, and declared that Mexican immigrants are “bringing drugs, they’re bringing crime, they’re rapists, and some, I assume, are good people.“ And that was just the opening bid. More recently, Trump openly advocated violence against black protesters, and falsely, explicitly asserted that black people are doing all of the murdering. That explicit anti-blackness has been overshadowed by the 9/11 story, but it is the sizzling plate of white resentment that Reagan could only let Republican voters smell from the kitchen, and Trump is serving it up with a bib and tongs. Surely, it is enough for Trump fans to forgive him for never having posed with a Sambo lawn jockey, although the campaign is still young.

What Republican voters might not know is that, during Reagan’s 1980 states’ rights kickoff speech in Mississippi, he also mentioned something else that he has in common with Donald Trump, something which might ease the pain for some voters who are unsure about Trump:

“I was a Democrat most of my life myself, but then decided that there were things that needed to be changed.”

Reagan made his pivot about the same time as the folks in that Mississippi crowd, while Trump coincidentally flipped right about when America elected the first black president.

Since Kasich’s ad is specifically aimed at Donald Trump’s mockery of a reporter’s disability, though, it’s tempting to give Dutch the benefit of the doubt here. Sure, he and Trump were both Hollywood performers (although Trump was much more successful) and they were both former Democrats who marshaled white resentment with ruthless expertise, but at least Ronald Reagan would never denigrate disabled people, right?

I asked, “What about the homeless? Do you think you could have done anything for them?”

Reagan said, “Well, it’s been so exaggerated. Millions, there aren’t millions. Real research reveals probably 300,000 or less, nationwide. And a lot of those are the type of people that have made that choice. For example, more than 40% of them are retarded, mentally deficient people…”