Donald Trump Releases His Birth Certificate, Or Certificate Of Birth, Or Something To Newsmax 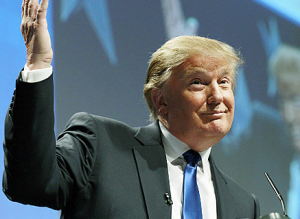 The latest chapter in the unfolding saga of the Donald Trump Traveling Birther Circus almost has me convinced that The Donald is punking Republicans, and his prospective presidential bid is really a work of brilliant performance art. On Monday, Trump released what he called his “Birth Certificate” to Newsmax, the Grey Lady of conservative news hubs. But according to reporting by Politico, the document Trump released isn’t actually an official birth certificate, but rather, a “Certificate of Birth” that hospitals give out.

While Politico does deserve some credit, a cursory glance at the document immediately raises doubts: 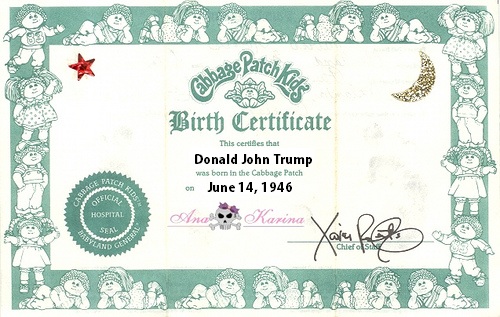 I kid, of course. You can see the document Trump gave to Newsmax here.

But after several New York City-based readers contacted POLITICO’s Maggie Haberman, her call to city officials revealed that an actual birth certificate, which is issued by the Department of Health, would have the agency’s seal and also a signature of the city registrar – neither of which the Trump document has. Officials said the city Health Department is the “sole issuing authority” of official birth certificates in New York, and that the document would clearly say so, and “city officials said it’s not an official document.”

Coupled with the recently “uncovered” details of Trump’s sweeping 1999 wealth redistribution plan, his candidacy is devolving into a parody worthy of Weird Al Yankovic.

Politico does a little bit of its own parody, mimicking Birther “logic” in their deadpan closing paragraph:

Trump’s mother, it should be noted, was born in Scotland, which is not part of the United States. His plane is registered in the Bahamas, also a foreign country. This fact pattern — along with the wave of new questions surrounding what he claims is a birth certificate — raises serious doubts about his eligibility to serve as President of the United States.

Unfortunately for Trump, eligibility is probably the least of his obstacles to becoming president, but if it helps any, I’ll vouch for him. The last thing I want to do is end Trump’s supernova-brilliant run for the Oval Office.