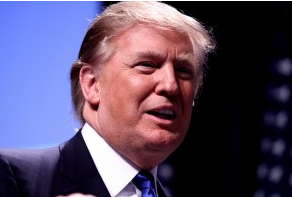 Well, we guess potential Republican presidential candidate Donald Trump didn’t get to where he is today by lacking perseverance. The businessman and TV star has continued his search for President Barack Obama’s birth certificate by tapping people in Hawaii to help him “study” the circumstances surrounding Obama’s birth.

He adds that his people in Hawaii “can’t believe what they’re finding.”

But, despite his by now extremely publicized concern with Obama’s nationality and the fact that, as he puts it, Obama “seizes countries, but he doesn’t win,” Trump doesn’t dislike the President. He just kind of thinks he’s dragging the U.S. straight down to Hell. That’s all:

If I had my choice of having Obama do great as a president, and do a really great job for this country, and not running, as opposed to running – I’d prefer that he did a great job. I love this country. But, this country is going to hell.

With Trump effectively making Obama’s birth the issue with which he’s most concerned, we wonder whether voters will have his back – or slowly back away – come 2012.