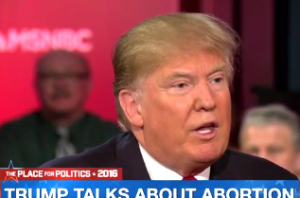 There is a widely-cited study from 2008 that sought to find out how many women would have an abortion in their lifetime. Statistics from the early 1990s put the estimate at 45% of women, but the 2008 study showed that it was approximately  one in three. Certainly, there are caveats to this. The abortion rate continues to decline in America because of a number of factors. There are restrictions to abortion services being enacted in almost every state at an alarming rate, which contributes to the falling rate of abortion. There is also the Affordable Care Act, which helps women get access to more effective birth control.

You know who wants to do away with the Affordable Care Act? Donald Trump. He has been doing his level best to offend every woman in America one way or the other, and it’s working: a recent poll showed that 73% of women of voting age have a very negative view of the mogul who truly seems to have woken up one day and said, “I’d like to run for president now.” Always one to go for the gold, Trump made a move today to close in on that elusive 27% of women who don’t yet despise him. He went after the approximately one in three women who will have an abortion in their lifetime. Watch:

JUST IN: Donald Trump tells @MSNBC: “There has to be some form of punishment” for abortion https://t.co/jgbstbqceO

Chris Matthews should be given nothing but credit for pushing Trump on this. Trump’s blustering and stuttering reveal the fact that he knows nothing about reproductive healthcare or policy and interviewing him as he flies all over the place can’t be easy, but the task falls to a new reporter (or five) every day and at least this time, Matthews killed it.

Should they be punished? Or are we only going to punish the women who fit into the narrative of being lazy “sluts” like Sandra Fluke? Are we only interested in punishing the women who are, in Trump’s words, bimbos? Pigs? Can a woman be a mother and a tramp at the same time? (Ask Kim Kardashian what she thinks on that one.)

Years – decades! – of the pro-life movement saying it’s not looking to punish anyone for abortion, cut out at the knees by Trump.

What blows my mind about this debate the most is that so many refuse to believe that the one in three could be their sister, their cousin, their aunt, their mom, or their best friend. It could be. Not only that, but it almost definitely is. Since I became a vocal advocate for abortion rights a few years ago, my personal inboxes have been inundated with messages from people who live in my ultra-conservative home state and have hidden their abortions from the people around them. Strangers message me to thank me for writing about reproductive rights. Acquaintances text me to ask me what clinic I recommend, what type of birth control they should get, or, sometimes, if I will go with them and sit in the waiting room. I am not a doctor. I don’t give medical advice. What I do, though, is listen, and what I’ve learned is that it really is one in three women, all of whom have their own set of circumstances, their own struggles, and their own triumphs.

Your grandmother and the woman who sits next to you at work are who Trump talks about when he talks about punishing women who have abortions. They are of whom he speaks when he so casually says “they would perhaps go to illegal places” to undergo a procedure that is safer than liposuction or carrying a pregnancy to term.

Finally, when one of the most anti-choice governors in the country so emphatically denounces punishing women for having abortions, you know the idea is radical to the point of being a full-scale war on women.

.@JohnKasich reacts to Trump’s abortion comments: “Of course, women shouldn’t be punished” for having an abortion https://t.co/bLyaNPVGoE

Do not enlist in that war. Do not let Trump get away with this. As John Kasich pointed out in the video above, Trump will find a way to say he never called for punishments for those who have abortions. We have it recorded. We know what he said. Unless you truly believe that every person in your life who has terminated a pregnancy should be punished — and again, I assure you there are people in your life who have terminated a pregnancy — then you must disavow this statement and this candidate.