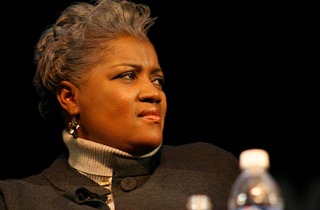 Perhaps CNN contributor and Democratic National Committee Vice Chair Donna Brazile hasn’t entirely recovered from her party’s losses in the midterm elections last week (though we thought she had).

In a new column at CNN.com, Brazile comes off entirely snobby and sexist while defending White House senior adviser Valerie Jarrett from stuff that is demonstrably not sexist.

Political blogger Carol Felsenthal started a stink over the weekend when she wrote in Politico Magazine that Jarrett, the Obama administration’s most controversial staffer, should be fired or moved into the role of the president’s “librarian.” Felsenthal also said Jarrett, with her ambiguous responsibilities at the White House, mostly acts as “First Big Sister” to President Obama and his wife Michelle.

What Brazile had to say about that:

Karl Rove may have been characterized as an evil genius, but he was never reduced to being called merely George Bush’s big brother figure. He was given credit for being good at what he did, not dismissed as a sycophantic surrogate sibling.

“Evil genius,” okay. “First Big Sister,” not okay. (Someone should tell Brazile that not all big sisters are like Lena Dunham. Some of them are quite aspirational figures.)

Rove was also once the butt of a gay-bait joke by liberal Bill Maher but we all have our problems.

Really, librarian? Why not just give her another stereotypical female job? She could become his secretary — fielding phone calls and taking messages. Or bookkeeper, balancing the checkbook. White House nurse, or a stewardess on Air Force One!

To Brazile, a librarian is a “stereotypical female job.” So are secretaries, bookkeepers, nurses and flight attendants (stewardess is no longer PC).

Not only does Brazile think those are jobs for women, she writes almost with an air of indignation at the thought of a woman working as a librarian. Or a bookkeeper, nurse or flight attendant. What’s wrong with those jobs? Are those beneath Brazile?

(Don’t even get her started on people who shop at Wal-Mart!)