Elena Kagan May Be “Post-Gender,” But The Media Are Not 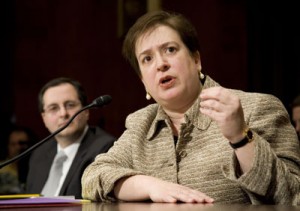 It’s almost human nature to reflect back and think, “look how far we’ve come.” In a sense, this is what The New Republic‘s Naomi Schoenbaum does in her piece, “Post-Gender Justice.” Examining what being a woman means to Elena Kagan, Schoenbaum notes that Kagan does not explicitly define herself as a woman leader in the law. But while the soon-to-be-confirmed Supreme Court nominee might not be defining herself through her gender, the media has tried its best to do it for her.

Schoenbaum contrasts Kagan with those who came before her — citing that while Justices Sandra Day O’Connor and Ruth Bader Ginsburg might not have had a choice, Sonia Sotomayor deliberately brought up her gender identity:

Those in O’Connor and Ginsburg’s generation paved the way for the next generation of elite women lawyers, including figures like Kagan and Sonia Sotomayor, both of whom had the luxury to opt notto focus on their sex as a facet of their career. Yet Sotomayor chose to make gender a key element of her identity anyway.

Kagan, by contrast, has given no indication that she considers her gender to be a factor in her legal thinking…her broader career, including her rise in academia and her tenure in the White House, has been marked by no particular interest in women’s issues.

The contrast between Kagan and Sotomayor, the “wise Latina,” is a marked one. It exemplifies how differently chosen to present themselves — and what aspects of themselves they find important or relevant to convey to the public.

In this sense, it is understandable that Schoenbaum would deem Kagan the “post-gender justice.” Also to the author’s credit is that she realizes that Kagan’s approach to her identity does not necessarily say anything about her future jurisprudence. Because realistically: anything can happen.

But rewind and take a look at how the media have covered Kagan, from pre-nomination to the present, and the picture isn’t as pretty. The media’s treatment of her has been anything but “post-gender.” When the media tore apart Sotomayor’s “wise Latina” comment, an argument could have been made that Sotomayor opened the door to it because she made the comment on her own.

Kagan’s situation cannot be justified in the same way. Firstly, there is the mass speculation over her sexual orientation: Is Elena Kagan A Lesbian? And why isn’t she married? While some outlets criticized her lack of experience (something legitimately relevant to her nomination), others found personal matters to be more pressing. God forbid the woman doesn’t cross her legs:

In the photographs of Kagan sitting and chatting in various Capitol Hill offices, she doesn’t appear to ever cross her legs. Her posture stands out because for so many women, when they sit, they cross. People tend to mimic each other’s body language during a conversation, especially if they’re trying to connect with one another. But even when Kagan sits across from Sen. Amy Klobuchar, who has her legs crossed at the knees, Kagan keeps both feet planted firmly on the ground. Her body language will not be bullied into conformity.

Arguably, this fixation with personal details — beyond just being a media obsession — does partially stem from her gender. Comments about Kagan’s clothing and hair did have something to do with her being a woman, and it’s certainly not the first time the media has done so. Hillary Clinton faced it during her presidential run: there was the neckline controversy, and the moment she teared up on the campaign trail. Gosh, she is such a woman.

Sarah Palin, too, received comments about her appearance, though no personalized nutcrackers.

So, yes, women do have more freedom now. They don’t face the same kind of discrimination they used to just a generation ago. But the media today like a good scandal, and frankly, they often like to play up trivial details. And women often come under more scrutiny than men would in their place. The women’s movement has evolved, as Schoenbaum says. But the media’s being “post-gender” is about as likely as this country becoming “post-racial” following President Barack Obama‘s election.