Escalating MSNBC, CNN Town Hall Programming War Is One Neither Side Should Apologize For
Opinion

Escalating MSNBC, CNN Town Hall Programming War Is One Neither Side Should Apologize For 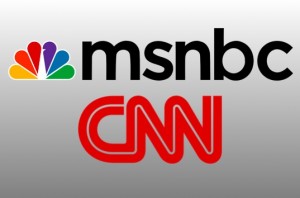 This is really, really getting good…

By this, of course, we mean the escalating political programming war between CNN and MSNBC. For someone who studies and absorbs this stuff on a daily basis, it’s a beautiful, brutal ballet of back-and-forth old school one-upsmanship. Neither side should be ashamed nor apologetic for treating each night of this primary season like it’s a Game 7. Instead, the moves we’ve seen should be met with nothing but applause.

First, a quick review: From this perspective, the first shot in this battle was fired when CNN swooped in and grabbed a GOP debate that was suddenly without a home after the RNC deemed NBC not worthy after getting no TLC from CNBC during its debate back in November. Note: The RNC was dead wrong in penalizing NBC for CNBC’s mistakes in treating its candidates in the shoddy, unprofessional, deeply-editorialized way it did. CNBC got slammed by almost every corner of the media and political universe after the debacle and rightly so. But NBC News, which works out of a completely different building and is guided by completely different management/producers, had nothing to do with the questions asked that night.

No matter… the RNC decided NBC News had to pay and the party divorced itself from the network’s February 26th debate. But before anyone knew if the void would be filled at all, CNN announced it had come to an agreement to host said debate instead. That’s not a criticism, it’s called hustle and taking advantage of a situation in gaining a dominant ratings night for itself. In its own right, Fox did the same in adding a second Fox Business debate when one hadn’t existed before. And MSNBC followed suit a few weeks ago when the DNC left a huge void in not originally scheduling a debate before the New Hampshire primary.

So if you’re keeping score at home, at this stage it’s CNN 1, NBC 0. CNN would extend its lead after creating a Town Hall literally from scratch featuring the Democratic candidates the Wednesday before the New Hampshire primary (it did the same before Iowa as well). The date for the CNN New Hampshire Town Hall was significant in this sense: Just days before CNN announced its Democratic event, MSNBC scored its first debate of the campaign season, which also featured Hillary and Bernie. Intentional or not, CNN’s Town Hall sucked some of the anticipation and attention out of the MSNBC debate leading up to it… because by putting the candidates in prime time one night prior, it controlled the news cycle the day leading up to the MSNBC event.

In the end, MSNBC still scored more viewers (4.5 million to CNN’s 2.7 million). But to CNN, (and this is just a guess) the goal was never to win, but discombobulate a rival before its biggest night in a long time. Lest anyone interpret that as criticism, because — and here comes your recurring theme — if I’m running that network, I would do the… Same. Exact. Thing.

All of that said, it’s so utterly hilarious to watch everyone lose their minds over MSNBC’s announcement Tuesday to counter-program a Donald Trump Town Hall at the same time as CNN’s 3-candidate GOP Town Hall tonight (Part I of a two night series featuring all six GOP candidates remaining)… which also didn’t publicly exist until last Saturday. Apparently some folks — media people I like and respect — are having a real issue with Joe Scarborough and Mika Brzesinski moderating said Trump Town Hall. This event will be preceded by a one-hour interview by Chris Matthews with New Hampshire 2nd-place winner John Kasich. The arguments regarding the former, of course, is the event proves Joe and Mika are in the tank for Trump! And MSNBC is only doing it to screw with CNN!

To address the latter, of course MSNBC is (partially) doing it to discombobulate CNN Wednesday night. It’s the Starks and Lannisters. Coke and Pepsi. El Nino and La Nina. Think about it: If the Yankees score a huge acquisition, do the Red Sox just sit back and take it? CNN earned major applause here over the weekend for scheduling those two GOP Town Halls this week. But you knew MSNBC was eventually going to fire back somehow. My friend J.D. Durkin of Mediaite called it sneaky. I prefer strategic. Because if I’m running that network, I would do the… Same. Exact. Thing.

In the end, it’s another media victory for Trump, because he draws attention away from the three candidates participating in the GOP Town Hall that night (Cruz, Rubio and less importantly, Carson). Trump then gets a second primetime stage the following night on CNN (along with Jeb and Kasich in Part 2 of its GOP Town Hall). It’s also a win for MSNBC, because they get a morale booster after getting outhustled by CNN on a few occasions and earn maybe even a ratings victory in the process via the ultimate eyeball attraction in Trump.

As for Joe and Mika hosting the event, how again does this prove they’re in the tank? Trump does O’Reilly, Hannity and Fox & Friends all the time. He does New Day and CNN primetime (Cooper, Lemon) regularly. NBC’s Meet the Press, CBS’s Face the Nation, ABC’s This Week… you name it. Outside of O’Reilly and Hannity, many of these interviews are done by phone to accommodate the candidate, which was almost unheard of before this election season.

Oh, and yeah, Trump also appears often on Morning Joe. Fact is, he’s everywhere, so why does Scarborough in particular get singled out? Because he gave Trump campaign advice once? O’Reilly does as well — on the air and proudly — as he offers tips to every candidate who appears on his program. It’s just his interviewing style (Basic gist: “Here’s what you’re doing wrong, so here’s what you should do instead if you want to win…”). And it works for the host because that’s always been the brand/persona. But we only hear about Scarborough in this regard, because he spends Christmas vacation at a Trump resort… or something.

Critics also say Scarborough is biased. Uh-huh… I suspect he is. Opinion hosts tend to provide, you know, opinions. Note: He’s not Anderson Cooper and he’s not Bret Baier in playing the role of a traditional anchor. So if the crime is that a former Republican congressman-turned-opinion-host gives more attention or even favors one GOP candidate more than others — one that is leading by a wide margin in the polls and attracts unprecedented media attention — then something is getting lost in translation. Because at last check, the all-Trump-all-the-time thing is happening everywhere across the dial. And if Joe has been “standing by” Trump by sticking with his perspective that his popularity would hold firm based on poll after state poll holding steady or even rising… that’s not bias, that’s sound analysis.

But, you know, Scarborough…

Whether you’re Roger Ailes, Jeff Zucker or Phil Griffin, the theme is clear: Viewers cannot get enough of this reality show of an election season. It’s a horse race on both sides, with no shortage of sound bites and more than enough compelling characters from Trump to Bernie to the Clintons and Bushes to go around. Every day, every hour is unpredictable, which keeps audiences tuned it. The three aforementioned cable network heads see the off-the-chart numbers political live events are generating and are now creating something from nothing — live events like Town Halls — every opportunity they can. Simple supply and demand…

When we look back on this rollercoaster leading up to election day, from a programming perspective, we’ll never, ever see anything like this again. So milk it. Keep creating these events whenever logistically possible. And if you can beat or discombobulate your opponent, even better… because I would do the… Same. Exact. Thing.

Welcome to the world of cable news. The candidates running for president aren’t playing nice, nor are the networks that cover them.