Ex-Wife of Alleged Klansman Cop: Boss Made Us Join the KKK
KKKops

Ex-Wife of Alleged Klansman Cop: Boss Made Us Join the KKK 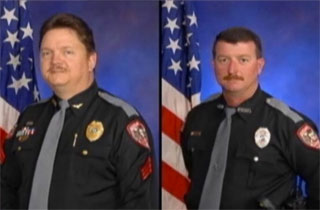 The weird story of the Florida police station with two Klansmen officers just took a weirder-er turn: the ex-wife of one of the officers accused of joining the Ku Klux Klan has turned around, saying his former boss actually told him to go undercover in the first place.

Ann Hunnewell, the ex-wife of Officer George Hunnewell, was working as a secretary at the Fruitland Park Police Department when her boss approached her and her husband with an unusual assignment: as she told the Florida Department of Law Enforcement, he wanted the two of them to infiltrate the local Klan to investigate rumors of a third Fruitland cop joining the hate group. (That cop, James Elkins, resigned in 2009 after his membership came to light.)

According to Ann, though she and her husband never believed in the Klan ideology, they were sworn into the KKK. But just for work purposes. Via ABC:

“Once in the room, a pillow case was placed over their heads,” Ann Hunnewell said of the induction at the Elkins’ home alongside six to eight others. “As the ceremony began, they were led into the living room and told to kneel. After a reading, their pillow cases were removed from their heads and the ceremony was complete.”

Her boss at the time, James Isom, vehemently denies that he ever asked the Hunnewells to infiltrate the KKK. (Isom also resigned in 2010 as part of a plea deal following a misconduct investigation, which really makes the Fruitvale Park police department an office full of winners.)