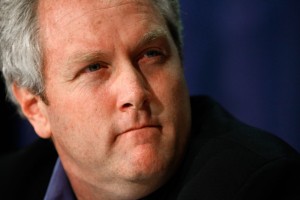 Just over a year before his tragic, untimely death, the late Andrew Breitbart sat down for an impromptu interview following an early lunch with then-liberal filmmaker Lee Stranahan, liberal blogger Mike Stark, and me. Events conspired to keep me from releasing all but a 3-minute clip of that interview, filmed during the 2011 Conservative Political Action Conference, until now.

Although my decision to finally put this interview out was partially spurred by the recent flap over comments that Meghan McCain made about Andrew on MSNBC, I am deliberately presenting these clips with a minimal amount of commentary. It’s not often that you get the chance to let a departed friend speak for himself, so that’s what I intend to let this interview do.

On a personal level, putting this interview together has been an unusual experience. I had never watched most of this footage until now, so it evoked a strong, Proustian response in me, if Proust had been a journalist, and his madeleines had been Lee Stranahan chiming in every time Breitbart got on a roll. Most of all, though, it felt unfinished.

Here is part two of that interview, in which Andrew and Stranahan talk about their critics (and Breitbart does a riff on Eric Boehlert‘s name), John Edwards, and something about John Boehner. They also talked about their burgeoning friendship, and toward the end, there’s a rather haunting, yet funny, moment where Andrew breaks into song, delivering a few bars of Aztec Camera‘s Walk Out To Winter. He also begins to touch on his attitudes toward gay rights, and their place in the conservative movement, which he continues in part three: