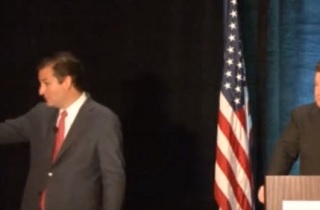 Last week, the conservative Heritage Foundation tried reaching out to it’s fellow hep-cat young individuals with a failtastic aping of Buzzfeed-style “wit” that failed to meet even that low bar, but by posting it in Buzzfeed’s community blog, managed to fool Senator Ted Cruz into thinking the site itself had torpedoed the Affordable Care Act. At the annual Redstate gathering this weekend, Cruz asked the crowd, “BuzzFeed, the left-wing site — y’all know Buzzfeed?”, and indicated that the site had turned on President Obama over Obamacare.

Like a narc walking around a frat party asking “fellow young people, where can I obtain an enjoyable reefer cigarette, because my reefer pusher is not answering his pager,” The Heritage Foundation dressed down its anti-Obamacare propaganda into a Buzzfeed Community post featuring a series of gifs that explain “That One Time I Was Really, Really Excited About Obamacare,” which somehow didn’t include when they invented it, or when Senator Barack Obama ran against it.

Cruz described the post with the same level of with-it clued-in-ness that went into it, telling the Redstate crowd that Buzzfeed “did a whole series of graphic pictures basically showing, ‘I was promised one thing on Obamacare and here is what I’m left with.’”

Those expecting dicks and entrails were to be disappointed.

“Look, when BuzzFeed is turning on him, this thing ain’t working,” Cruz concluded.

The Buzzfeed community blog os open to anyone, so Cruz saying Buzzfeed has “turned on” President Obama is like saying that the telephone has turned on Anthony Weiner. Okay, maybe that’s a badly-phrased analogy. Turned against?