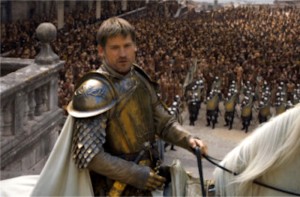 Spoilers for Game of Thrones Season 6, Episode 6: “Blood of My Blood”

“Blood of My Blood” is a serviceable mid-season housekeeping episode. It lacks the thematic heft and dramatic bombshells of the episodes that proceeded it. But it possesses a diamond-cut focus, assiduously advancing a carefully chosen handful of subplots and even providing moments of tension and humor that were completely absent when this season began. Nobody will breathlessly re-watch “Blood of My Blood” the way they might, say, last season’s “Hardhome” or Season 3’s “The Rains of Castamere,” but it’s the sort of hour we need to sit through every now and then for a story as vast as Game of Thrones to move forward.

In keeping with last week’s project to re-arrange the characters to get them where they need to be, this episode functioned as a catalogue of reunions. It’s almost as if every character is keenly aware that the midpoint of this season has passed and it’s high time to establish your allegiances well in advance of the next war to come. Samwell Tarly awkwardly attempted to re-integrate with his estranged family, Daenarys emerged riding atop her favorite “child” Drogon, King Tommen tried to find common ground with his wife Queen Margery, and Benjen Stark rode in after a five-season absence to rescue his nephew Bran — both of whom have been supernaturally jolted by forces beyond the Wall since they last shared a room together in Winterfell in Season 1.

In Kings Landing, the Lannister/Tyrell alliance forged last week is about to be stress-tested by the fact that Tommen appears to have gone full Seven-Pointed Fanatic. Queen Margery Tyrell may be immune to the High Sparrow’s particular brand of religious extremism, but the same cannot be said of her husband, the King, who has undergone a disheartening, if not unexpected, conversion to the most orthodox elements of the Faith.

“The Crown and the Faith are the twin pillars upon which the world rests,” he says, echoing what his mother once said to the High Sparrow. His conversion, announced publicly while the High Sparrow smirks, is punctuated by the fact that the Kingsguard are wearing armor stamped with the image of the Seven-Pointed Star. Olenna Tyrell is quick to see this in purely militaristic terms: “He’s beaten us.”

“To die in the service of the gods would please each and every one of us. We yearn for it,” the High Sparrow says, when it looks like the conflict between the Faith Militant and the Crown might boil over into bloodshed in the streets of Kings Landing. But given how pathetically pliable little King Tommen is, such martyrdom won’t even be necessary. Tommen was raised as an also-ran second son. And at the precise moment he was elevated to the throne, he was used as a tug-of-war rope between his mother, his grandfather Tywin, and his queen. The kid has never had the capacity to form his own thoughts about anything. It makes perfect sense that he would be putty in the hands of a ideological purist and master manipulator like the High Sparrow.

Meanwhile, at least the bond between Cercei and Jaime Lannister is holding up quite nicely, as she enjoins him to “Show them who Lannisters are, what we do to our enemies!” Theirs is perhaps the most betrayal-proof alliance in the entire show. It’s a touchingly unique compact in a story where everyone is looking out for themselves and loyalty almost always ends up revealing itself to be a tragic flaw. The fact that they’re incestuous twins feels almost incidental. At least they’ve got each other’s backs.

Jaime has been sent away from Kings Landing (at the suggestion of the High Sparrow, it is implied) to go off and fight the Blackfish at Riverrun. Yes, the Blackfish, as in Brynden Tully, Catelyn Stark’s uncle, who was one of the few Northern elements to escape the Red Wedding massacre in season 3. We learned last episode that he has amassed an army in the Riverlands, and was gearing up to — oh, but this is precisely the sort of mainland politicking that all of the Westerosi houses really need to drop, isn’t it? Because there are bigger problems than your workaday mainland strife.

Let’s review: In Essos, Daenarys “I Take What Is Mine” Stormborn has summoned her largest dragon Drogon and used him as a pulpit to deliver a stirring Saint-Crispen’s-Day-esque speech to the Dothraki, commanding them to follow her across the Narrow Sea to sack the Seven Kingdoms into oblivion. (As if they needed such a speech after watching her walk out of the burning temple completely unscathed.)

Daenarys’ story, which had been trammeled by narrative cul-de-sacs about Sons of the Harpy and Slavers Bay internal politics in recent seasons, seems to have finally caught fire and is headed for a much delayed conflagration.

Meanwhile, in the North: Benjen Stark is alive, so to speak. He appears ashen and gray, and he admits that he had been killed by the White Walkers, then resurrected by the Children of the Forest. The Night King is coming, he says, and Bran is the only one who can stop him. Bran is now endowed with the powers and knowledge of the Three-Eyed Raven, having downloaded all the histories of the Seven Kingdoms in a rapid rush, and is now struggling to unzip them all in time. We saw flashes of various visions and scenes from earlier in the show — the only new bits consisted of intense close-ups of bright green wildfire and brief shots of Aerys “The Mad King” Targaryen shouting “Burn them all!” (Though, this little clip might provide credence to certain theories making the rounds online.) But just as Sansa recently reunited with Jon, Bran’s linking up with Benjen signals a return to normalcy, dispersed family members finally coming together to achieve a common goal.

The same cannot be said of Samwell Tarly and family. His father Randyll Tarl is every bit the ornery bastard Sam described him as. Randyll has chronically and critically underestimated his son, and the ironies in that terribly awkard dinner scene were shoulder-deep. While the disinherited Sam was off hunting his own food north of the Wall, doing battle with cannibalistic Thenns and shattering White Walkers into crumbs of ice, his (apparently) spineless brother was leading a charmed life in the gilded halls of Horn Hill, going off on deer hunts and smugly awaiting his inheritance — including the house sword, Heartsbane.

Come to think of it, house swords are a pretty good distillation of the show’s main conflict, which, as I said last week, could be described as highborn fools killing time bickering with one other while death rains down on them from afar. These relic weapons, unique and priceless because they were forged in Valyrian steel, are treated like tokens of pride and honor of great families, passed down according to all kinds of arcane rules of inheritance and custom. But beyond their symbolic value, they are literally the only thing that can kill the most urgent existential threat facing the realm.

In short, while traditionalists like Randyll Tarly fiddle and moan about “honor,” they fail to put the tools that can actually save them in the hands of the people who know how to wield them.

As ever, the real tension of Game of Thrones lies in the conflict between killing time on inconsequential skirmishes and getting on with the real story.

For the second week in a row, we got to see the Braavosi satire of the Seven Kingdoms history. It’s discouraging, if unsurprising, to see the way in which the official narrative has taken hold in the popular imagination: Tyrion and Ned Stark as inept schemers, Joffrey and Robert as tragic heroes, and the whole business punctuated by fart jokes. Arya’s decision to spare Lady Crane is insensible considering she knows how high the stakes are for failing the Faceless Men again, but the actress’ choices to play the royal drama straight — not for cheap laughs — clearly struck a chord for the one person in the audience who knows what’s being represented on stage.

Hannah Murray, who plays Gilly, has for five seasons now brought such understated wit to what could have been a throwaway role. Her scenes with Sam and his family were the strongest in this episode.

Things appear to be heating up in the Riverlands. Again, with the specter of dragon fire descending from the east and the blue-eyed death about to rain down from the north… who cares? But maybe that’s why this show works. Nobody’s ever fighting the right war.