FBI Director Shades Everyone Freaking Out About Clinton Emails: ‘Opinions Are Irrelevant’ 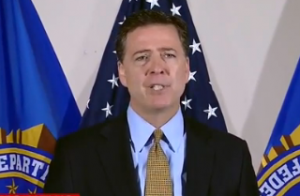 All anyone has been talking about for months and months is the Hillary Clinton email scandal. She used a private server, if you don’t know, and seeing and hearing people gush about what they saw as her inevitable indictment was an hourly occurrence up until just now, when FBI Director James Comey said he is recommending there there be no charges.

That is not likely to stop any of the people who have crusaded against her and her emails from continuing to do so. There are entire Twitter accounts set up to reply to every one of Clinton’s tweets with some variation of, “Oh, yeah? WELL YOU DELETED YOUR EMAILS. #Hillary4Prison.” The emails are discussed on Fox News’ Outnumbered almost every day. Donald Trump‘s constant, vague references to her emails have whipped a number of his supporters into a froth, though it would be interesting to see who — on either side of the political aisle — actually knows anything beyond “Hillary Clinton deleted some emails?!” In comments sections and break rooms alike, it doesn’t appear that too many of those who are outraged know much beyond that.

Comey knows that better than anyone and he used the last moments of his speech today to throw a little shade at those who’ve been getting apoplectic about something only the FBI has really known the details of. He took them to task for presuming to know better than his organization. Watch:

“Opinions are irrelevant,” he said. “And they were all uninformed by inside investigation because we did our investigation the right way. Only facts matter and the FBI found them here in an entirely apolitical and professional way.”

Well, that settles that, then, right? What do you think? Will those who are most incensed about all of this calm down now or will they expand their anger to the FBI?