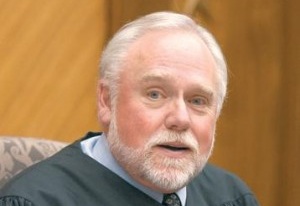 The more things change, the more they stay the same. A federal judge in Montana is under fire for sending a racist, bestiality-themed joke about President Obama from his official email address. Chief U.S. District Judge Richard Cebull admitted to sending the email, and admitted that the email was racist, but says “I didn’t send it as racist, although that’s what it is.”

Judge Cebull forwarded the email to six acquaintances (plus to his own personal email address) on Feb. 20, who then forwarded it to some other people, until someone eventually sent it to The Great Falls Tribune.

The “joke” in question is pretty sick stuff, even by racist Barack Obama-opponent standards. From The Great Falls Tribune’s John S. Adams:

The subject line of the email, which Cebull sent from his official courthouse email address on Feb. 20 at 3:42 p.m., reads: “A MOM’S MEMORY.”

“Normally I don’t send or forward a lot of these, but even by my standards, it was a bit touching. I want all of my friends to feel what I felt when I read this. Hope it touches your heart like it did mine.

“A little boy said to his mother; ‘Mommy, how come I’m black and you’re white?'” the email joke reads. “His mother replied, ‘Don’t even go there Barack! From what I can remember about that party, you’re lucky you don’t bark!'”

…”The only reason I can explain it to you is I am not a fan of our president, but this goes beyond not being a fan,” Cebull said. “I didn’t send it as racist, although that’s what it is. I sent it out because it’s anti-Obama.”

What does that even mean, “I didn’t send it as racist?” Does he think his email just ended up in the wrong pile?

The encouraging takeaway from this story is that it only took about a week for someone to do the right thing, and expose the judge’s sick email. Cebull actually had the balls to act offended by this, telling the Trib that he was “surprised the recipients of the e-mail passed it along with his name on it.”

“This is a private thing that was, to say the least, very poor judgment on my part,” Cebull said. “I did not forward it because of the racist nature of it. Although it is racist, I’m not that way, never have been.”

But incidents like this also underscore the fact that racism of the most despicable kind is alive and well in 2012. Take him at his word that he’s not a racist, and Cebull is guilty of not knowing that this kind of dehumanization is racist, or not caring. The thing is, racists never think they’re racists, they just think they’re telling the truth.

The important thing to note here is that Cebull isn’t in trouble for sending the email, he’s in trouble because he got caught. There will be many people who will cast this as an isolated incident, a curiously illogical bit of reasoning from people heavily invested in pretending that racism doesn’t really exist anymore.