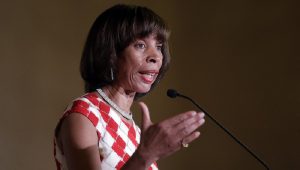 The mayors talked about how dismissing reproductive rights as an issue that only affects women can make the issue seem less important.

“It’s a sad reality that policy which affects everybody is given less weight when defined as concerning ‘women,'” Aimée Lutkin at Jezebel notes.

The mayors made an important point: women’s issues are often sidelined due to the popular, inaccurate notion that they exclusively affect women. Of course, not only is this inaccurate given the long-term economic consequences of whether or not communities have access to reproductive health care, but this phenomenon also reflects harmful sexism in the devaluation and trivialization of matters that people believe primarily affect women.

Just off the top of my head, both politics and pop culture are rife with examples of this. For one thing, there’s actress Emma Watson’s alliance with the United Nations in order to promote the “He for She” movement, which aimed to get men involved with feminism. Sure, feminism benefits men, too — unfair patriarchal constructs that glorify masculinity to a dangerous extent and punish men who don’t confirm, just like how misogynistic stereotyping hurts women.

“To the best of your knowledge, has a man ever delivered a baby?” Shimkus smugly asked his peers as the House Energy and Commerce Committee argued about requirements for insurance plans. I’d personally love to hear Shimkus explain how he thinks he, a man, came into this world, but that’s neither here nor there.

Pugh, the aforementioned mayor of Baltimore, said of reproductive rights and representation of women in politics, “It’s not just our issue. It’s everybody’s issue.”

At the end of the day, it’s time for us to recognize as fact that women’s issues affect everyone, that women are 51 percent of the population, not some small, fringe special interest group. But in the same vein, if we truly respect women as human beings and equals to men, then we won’t require men to have a stake in women’s issues before paying these issues respect and attention. We won’t require men’s approval to legitimize and validate women’s rights. The only incentive we’ll require to support causes that enfranchise women will be that these causes enfranchise women.

You can listen to the 11th episode of Women Rule below: