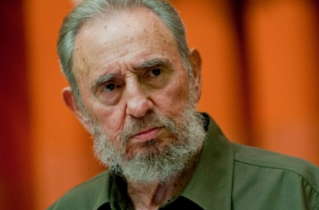 Everyone is talking about President Barack Obama‘s recent trip to Cuba, which involved joint pressers with Raul Castro, baseball games, and the usual partisan drama. Now that Obama is officially out of Cuba, Fidel Castro has poked his nose out and deemed it safe to release a 1500-word op-ed blasting the president for coming and meeting with his brother.

Because Google Translate only gives so much nuance and understanding, here is how Fox News covered the op-ed:

But in his column, titled “My Brother Obama,” the older Castro all but mocks the U.S. president’s efforts. He goes over crucial sections of Obama’s speech line by line, engaging in an ex-post-facto dialogue with the American president with pointed critiques of perceived slights and insults, including Obama’s failure to give credit to indigenous Cubans and Castro’s prohibition of racial segregation after coming to power in 1959.

If you can read Spanish or stomach the touchy, disjointed word soup of Google Translate, the original article is here. Although it can be hard to parse at times, the entire letter makes sense on the whole. Castro dedicated his writing in the official Communist newspaper of Cuba’s government to reminding Obama and the American people that there has been too much animosity and violence in the past to just become pals now. This passage stands out as understandable and evocative:

In 1961, just two years and three months after the triumph of the Revolution, a mercenary force with cannons and armored infantry, equipped with aircraft, was trained and accompanied by warships and aircraft carriers in the US, raiding our country. Nothing can justify this premeditated attack that cost our country hundreds of killed and wounded. Pro-Yankee Brigade assault, nowhere has there could have evacuated a single mercenary. Yanks warplanes were presented to the United Nations as rebels Cuban teams.

The hand of friendship Obama tried to extend just got slapped away by an 89-year-0ld man who said, simply, “We don’t need the empire to give us any presents.”