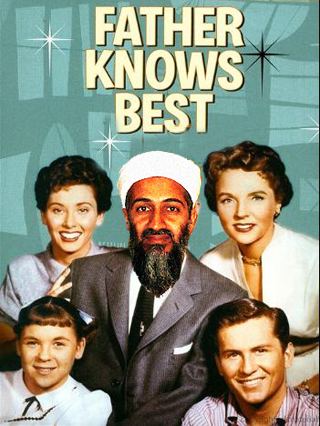 The Telegraph is reporting that a final message from Osama bin Laden to his family has been published in a Kuwaiti newspaper. In it, Bin Laden apologizes for neglecting his children and orders his wives to never remarry. Huh, so he was a bossy absentee father. God, it’s stories like these that make me think that guy was kind of a dick.

So, how do we know that Bin Laden was jerky to his kids in addition to the neighbors’ kids? Well, from the Telegraph:

“‘You, my children, I apologise for giving you so little of my time because I responded to the need for Jihad,’ the will states.

The four-page document, published in a Kuwaiti newspaper, is largely devoted to justifying the terrorist’s efforts to destroy America and Israel. There is no mention of possessions. Bin Laden was believed to have inherited an £18 million fortune from his father, a construction magnate in Saudi Arabia.”

The letter also includes requests that his kids not follow in his Jihadi footsteps. Hearing that, you can really imagine the fights in that household. (“Son, is this a videotapes message of hate addressed to Al Jazeera?” “I learned it from you, dad! I learned it from you!!”) Bin Laden apparently cites “a precedent from the Islamic texts” as for why his children should avoid the family business.

The document tells Bin Laden’s wives, “Don’t consider marrying again, and devote yourselves to your children and guide them to the right path.” Needy, much?

While this all a very interesting, it should be noted that the letter was apparently written all the way back in December of 2001 when everyone, including Bin Laden himself, thought Sunday’s announcement would be coming much sooner. For all we know, he could have written an entirely different will since then in which he realizes that forcing multiple women to live out the rest of their lives completely loveless is sort of mean. Of course, that was probably unlikely. After all, like I said, Bin Laden was kind of a dick.