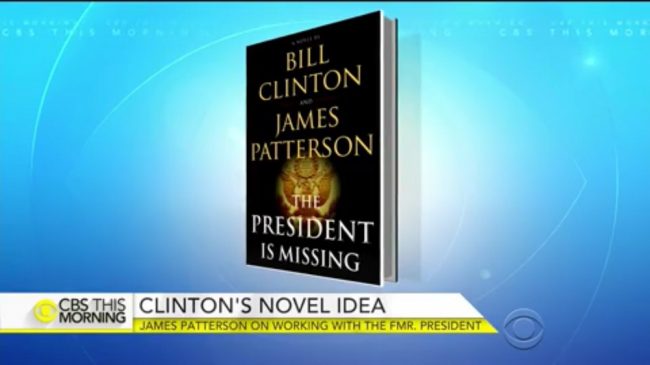 Former President Bill Clinton and bestselling author James Patterson are collaborating on a novel that is apparently a “unique amalgam of intrigue, suspense and behind-the-scenes global drama.”

The book, titled “The President is Missing,” will be released in June 2018. Two publishers that usually compete in the book market — Knopf, which published Clinton’s 2004 memoir; and Little, Brown and Company — will be the joint publishers of the novel.

The New York Times covered the book announcement in a Monday article. The newspaper reported that “the project came about late last year when Robert B. Barnett, a lawyer at Williams & Connolly who represents both Mr. Clinton and Mr. Patterson, had the idea of pairing them up on a novel, according to someone familiar with the project who did not want to speak publicly because the publishers were holding back details about the publication.”

The Times also revealed that “Mr. Clinton, a longtime reader of Mr. Patterson’s breathless thrillers, was game, so Mr. Barnett took the idea to Mr. Patterson. Mr. Patterson wrote an extensive outline.” They also pointed out that “some close observers of Mr. Clinton, who loves mysteries and thrillers, say they are not entirely surprised that he’s trying his hand at fiction.”

Patterson briefly touched on the upcoming novel in a Tuesday interview on CBS This Morning. He disclosed that he and his co-author were “halfway through it,” and that he might work on a second book with the former president (see video below)