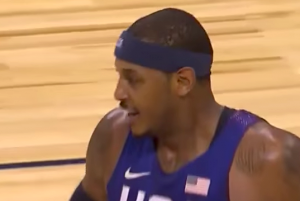 Former U.S. Olympic sprinters Tommie Smith and John Carlos — who famously raised their fists during a medal ceremony in the 1968 Summer Games — are looking to Carmelo Anthony and other NBA stars to follow in their footsteps.

Speaking to The Undefeated — the ESPN website focused on the intersection of race, sports and culture — Smith said that he was impressed by the New York Knicks star’s “attitude of truth.”

“The truth he tells like it should be told, so the other people can see themselves in what he is doing. It’s a bit like the old times,” Smith said.

Anthony’s social activism has been prominent in recent weeks. On July 25, Anthony hosted a town hall in Los Angeles, at which local teenagers, community leaders, and LAPD officers came together to for a wide-ranging discussion.

Carlos told The Undefeated that he is looking to Anthony’s peers to “be a voice for the voiceless.”

It’s not just Carmelo Anthony. It’s LeBron (James). It’s Chris (Bosh). It’s (Dwyane) Wade. It’s all the individuals collectively. I think this is a lifelong relay. This is not a moment with two people in 1968. It’s a movement. These young individual athletes are an extension of that movement. They have a vision on how things can be based, on how we felt at that time that is relative to the fact that I can’t be concerned about myself as much as I should be concerned about individuals who grew up in my community or the individuals who are suffering throughout the world for various reasons.

They realize they can be what we anticipated being in ’68. So we commend each and every one of them for what they’re doing. We hope that they can encourage others, not only professional athletes, but professionals in general to stand up and be a voice for the voiceless