FiveThirtyEight Publishes the Most Brutally Honest Editor’s Note Ever 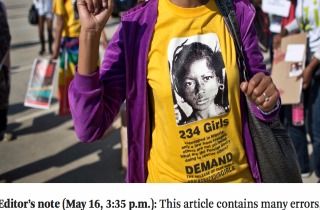 Nate Silver’s project devoted to dispassionate data analysis, FiveThirtyEight, published an interesting feature mapping the decades-long trend of kidnappings in Nigeria. The post featured an interactive map, a kidnapping timeline, and the data which indicated the rate at which people were being abducted in each of Nigeria’s 37 states. There was just one problem with that post: It was all wrong.

“This article contains many errors, some of them fundamental to the analysis,” the brutally honest editor’s note, posted at 3:35 p.m. ET on Friday on Mona Chalabi‘s post, began.

The editor’s note made mention of the fact that the data used to support the conclusions in this article was flawed. “We should only have referred to ‘media reports of kidnappings,’ not kidnappings,” the note read.

But that was just the beginning. “This mistake led to other problems,” the note ominously continued:

The editor’s note goes on for two more paragraphs noting why the data on kidnappings in Nigeria is fundamentally suspect and some reports of kidnappings often contradict others.

“This piece did not meet FiveThirtyEight’s standards for publication,” the note concludes. “We apologize for the mistakes. We will do better.”

While some might have opted to take the article down, FiveThirtyEight has left the article published in its original form. Some publications choose to take this course after having published significant errors in order to maintain transparency and preserve the trust of their readers.