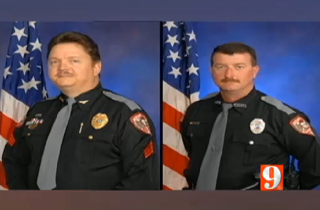 A Florida police department is seriously wondering where they went wrong after they learned last week that two of their officers were allegedly members of the Ku Klux Klan — especially since, five years ago, they had to fire another officer for being a KKK recruiter. (That is three Klansmen too many for an organization.)

The Fruitland Park police department received evidence from the FBI alleging that two of their own, Deputy Chief David Borst and Officer George Hunnewell, were secretly Klansmen. Though it’s technically not illegal for them to associate with the Klan (despite its classification as a hate group by the FBI), the conduct led Chief Terry Isaacs to investigate. Borst resigned of his own volition, but denied that he was a secret Klansman. (Hunnewell was fired for other performance issues.)

In a statement to the Orlando Sentinel, Isaacs said that the department was upset at the accusations. “The last thing I was expecting to hear in the year 2014 was for a professional law-enforcement officer to be a member of a subversive organization,” he told them.

Which is funny, because in 2009, the Fruitland Park police department had the exact same problem:

A city police officer has resigned after allegations surfaced that he was a “district Kleagle” and “staff sergeant” in the Ku Klux Klan.

Watch a report on the scandal below via WFTV: