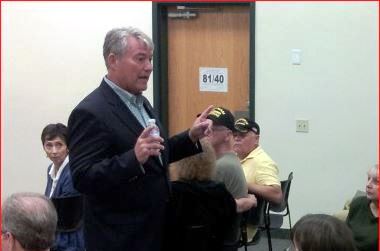 Say what you will about Florida lawmakers, but at the very least they have they conviction to stand in front of their African American constituents and tell them that they’re worthless subhumans. Following a town hall meeting from earlier in the week in which Ted Yoho told a voter that he wasn’t sure if the Civil Rights Act was constitutional or not comes this video of Representative Dennis Ross telling a fast food worker that raising his wage just wouldn’t be right.

In other words, fast food franchises’ right to make massive profits off cheap labor and cheap products, and consumers’ right to pay almost nothing for their food supersede the rights of the people who make it all possible to pay their rent.

The comments came as President Obama is in the midst of a campaign to increase the federal minimum wage to $10.10, and on the heels of widespread fast food worker strikes last year. A number of states have moved to raise their own minimum wages in response to the movement, but some are holding fast in their conviction that so-called unskilled labor is worthless and the people who engage in it deserve what they get. Earlier this week Oklahoma governor Mary Fallin signed a law banning cities in her state from passing higher minimum wage laws. Ross, like Fallin and other Republicans, think that providing for a living wage for low-income workers would send the country spiraling into chaos, because, well no one knows why really. Faith-based economic stuff. Bootstraps or what have you.

The Center for American Progress examined two decades worth of minimum wage increases and found that it does not result in the type of job losses that Ross and company are always crowing about, even when unemployment is high.

Me. I will pay for it. I will gladly pay a couple quarters more for my french fries if it means the people making them for me can make a living. I know it sounds crazy, but I’m willing to make that sacrifice.

Not so for everyone. If we raised to cost of a hamburger a few dimes, well, that’s just not the type of America Ross and his cohorts want to live in. It’s just not right.

In Mach of last year Ross voted against a bill introduced by George Miller of California that would raise the federal minimum wage to $10.10 an hour. Early in his career as a lawyer he worked as in-house counsel for Walt Disney World, defending the massive company from the evils of worker compensation claims.

“I’m not suggesting that we do away with the minimum wage, that’s not it at all,” Ross says at the town hall meeting. Not at all. He just wants it to remain frozen in time.

“But the minimum wage is not a career wage.”

This is a common talking point for opponents of a raise. These people should be moving onto better jobs after a few years, they suggest. Fast food jobs are for kids, they say. Ok, sounds great. Where are these other jobs they’re graduating to?

“It’s a wage to pay to make sure workers aren’t taken advantage of by business owners,” Ross went on. “If the government’s going to tell me how much I can get paid and when I can work and when I can’t work, then we have a serious problem in this country.”

We do have a problem already. According to the National Low Income Housing Coalition, it would take a minimum wage worker in Florida 98 hours to earn enough to be able to afford a reasonable two bedroom home in the state without paying more than 30% of their salary.

Big deal, right? Let them eat fast food hamburgers, Republicans like Ross seem to be saying. At least they can still afford them. They’re so cheap.