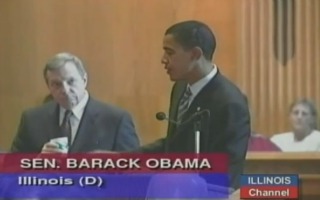 In 2005, amid a contentious battle between President George W. Bush and Congressional Democrats over the White House’s proposed reforms to Social Security, then-Sen. Barack Obama attacked Bush for ignoring the real looming entitlement crisis – the unfunded liabilities and rate of growth associated with Medicare.

RELATED: Wolf Blitzer Challenges Wasserman-Schultz Over Claims That Ryan Will ‘End Medicare As We Know It’

“Though I think I’d add, and then I’ll turn it over to Dick, despite the President staking his domestic policy agenda in his second term on Social Security reform, the real crisis – in terms of funding – is not Social Security. It’s Medicare,” said Obama.

He described Medicare as “breaking down rapidly” and called it the impetus for a “fiscal crisis.” Obama wondered why President Bush seemed unwilling to tackle that looming crisis.

Fast-forward to 2012, with a conservative Medicare reform plan on the table championed by Republican vice presidential nominee Paul Ryan, the Obama camping has released an ad which features Florida’s seniors attacking Ryan for attempting to reshape Medicare and depicting Obama as the program’s savior.

In July, Obama criticized Republican presidential nominee Mitt Romney for advocating reforms to Medicare that would communicate to seniors on the program that “you’re out of luck. You’re on your own.”