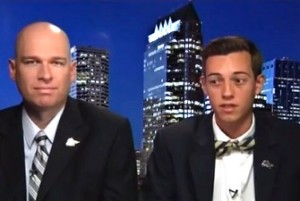 The War on Faith never ends, as the good Christians at Cambridge Christian School in Tampa will tell you. It seems the head of the Florida State High School Athletic Association, Dr. Roger Dearing, wouldn’t let them pray with their also-Christian opponents from University Christian from Jacksonville at a playoff game in December, and now these Warriors for Christ are ready to sue!

As I watched kicker Jacob Enns and Jeremy Dys told their story on Fox and Friends, I got angrier and angrier at how oppressed these two teams from Christian schools were, not even being allowed to pray privately before the big game just because it was being played at a public stadium, under the aegis of a state agency. You will, too, I’m sure:

Enns: We wanted to begin with prayer, something that we’ve done for as long as I can remember, before every single home football game.

Doocy: True. Well, it was — you go to a Christian school. And you were facing off against another Christian school. You would think that it would be a fair request. Hey, can we start with a prayer? But, Jacob, when they said no, what did you think?

Enns: Well, we basically couldn’t understand why they wouldn’t let us pray. You know, seeing it was done for as long as we have remembered. And it really, you know, made us frustrated and disappointed to think, why would they not let us do this against, you know, another Christian school. And when they pray — you pray, you pray pretty much everywhere, anyways.

Doocy: They do. A lot of kids pray in school every day. i remember praying before any big math test and other times as well before sporting events when I was growing up. Jeremy, the Florida association said that to do that, they would be breaking the law. is that accurate?

Dys: No, it’s not. In fact, they’re the ones that are breaking the law. And, look, we see these kinds of cases all the time at libertyinstitute.org. It’s just incredible to me that you have two Christian schools have earned the right to play in the state championship football game. Schools that have tradition and have prayed before every single one of their football games last season.Aand now they’re told they can’t pray over the loud speaker at a state championship just because it’s their property. That’s wrong. For a government to censor a Christian school’s private speech and prayers is wrong. And the lesson they’re teaching the kids is just terrible.

Wait, what? Praying over a loudspeaker is “private speech?”

Doocy: If that’s what you want, you want apology. Jacob, it turns out the two teams did meet before the game, and you did pray, right?

Enns: Yes, we met at midfield and we prayed with our opposing team. We said “The Lord’s Prayer” together and just as something to unify each other as fellow believers, and to honor the lord through that.

Wait, so they did get to pray, right on the field? At midfield? Did they also sing a few verses of “Onward Christian Crybabies?”

That’s right, as it turns out, this whole thing is about being able to pray over the PA system at the Citrus Bowl, just in case anyone was wondering what Billy Crystal‘s Lou Gehrig impression would sound like in the original King James version. Even Doocy doesn’t seem impressed at the end.

These are the absurd lengths that the aggrieved minority of the overwhelming Christian majority will go to in order to sucker people into funding things like The Liberty Institute or Jethro’s Big Anti-Gay Pizzeria. This guy knows full well he’s got no legal leg to stand on, yet he’s fanning the flames of this poor young man’s butthurt at being forced to pray at the 50 yard-line of the Citrus Bowl instead of, I guess, the broadcast booth.

On the other hand, the Florida Athletic Supporter’s Association, or whatever, isn’t relying on the most sound logic:

However, the head of the Florida State Athletic League ruled because the game is being played at the Citrus Bowl in Orlando, which is predominately paid for with tax dollars, and because the Athletic Association is a state agency, prayer is not allowed.

The head of Cambridge Christian Tim Euler says the ruling makes no sense.

“Here’s the problem,” Euler told us, “Florida State Legislature is opened up with prayer in a building that is paid by tax dollars. What is the difference?”

While Dys and his clients don’t have a legal case, the association had discretion, and they could have just let the kids pray over the loudspeaker, no matter how literally Godawful that would have sounded. But forget it, Jake. It’s Florida.