For the First Time Ever, I Agree with Michelle Obama: Trump is Disgraceful 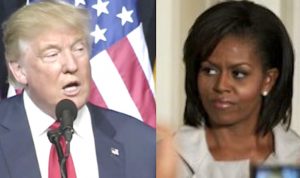 Blood and rage are coming out of Donald Trump from everywhere (reference to hemorrhaging intentional) as a torrent of unseemly allegations swarm around him like flies on a cadaver. First, there were the allegations of “creepy behavior” by beauty contestants of the Trump-owned Miss USA and Miss Teen USA pageants. Now, fresh ones have surfaced from six women who accused Trump of “groping and forcibly kissing them.”

(One begins to think that there’s no coincidence the defrocked Fox News CEO Roger Ailes is advising Trump’s campaign. Birds of a feather…prey together.)

Instead of trying to calmly and methodically produce evidence to combat these allegations, Trump mocked one of the accusers, a former People Magazine reporter, suggesting there was no way he would assault her because she was ugly.

Then there are the allegations that Trump called deaf actress Marlee Maitlin retarded, and mocked her voice during a season of Celebrity Apprentice.

“During the taping of the show, Trump would often scribble down notes while sitting at the table of ‘the boardroom’—the show’s primary set. A person familiar with the notes who helped clean up after tapings said that on one of the pieces of paper, Trump wrote: ‘Marlee, is she retarded?,'” reported The Daily Beast.

Another contestant that season, Richard Hatch, described Trump’s making sexual comments to Matlin, Lisa Rinna and other female celebrities as “weird” and “grotesque.”

“He doesn’t engage with women normally,” Hatch later told ET. “I think he thinks he’s complimenting people, when he’s practically drooling… My guess would be that he would describe it as flirting.”

Gross is all I can say. First Lady Michelle Obama described Trump’s alleged behavior best in a speech to students at Southern New Hampshire University.

“And I have to tell you that I can’t stop thinking about this. It has shaken me to my core in a way that I couldn’t have predicted . . This is not something that we can ignore. It’s not something we can just sweep under the rug as just another disturbing footnote in a sad election season. Because this was not just a lewd conversation,” Obama said.

For the first time in eight years, I agree with Michelle Obama. Yes, even “a six-year old knows better and that this isn’t how adults behave.”

Trump would be wise not to train his anger and what little real campaigning he has left in him — on Michelle Obama. She’s not the problem, nor is the global conspiracy that Trump swears is against him.

Trump is the problem. Mrs. Obama said this “is not normal. This is not politics as usual. This is disgraceful. It is intolerable. And it doesn’t matter what party you belong to — Democrat, Republican, independent — no woman deserves to be treated this way.”

Again, she is right. If elected president, would Trump treat women in his cabinet like objects he owned, that he could demean and grope at will? For someone so consumed with the female anatomy, any reasonable person wonders if Trump would have the ability to focus on leading America.

Look at you Mr. Trump. Look at you! In the final few, precious weeks of the 2016 presidential campaign, you’ve become a raving lunatic…a side-show spectacle.

I don’t believe Hillary Clinton will be the best President or bring the country together. She’s the lesser of two evils and that’s no endorsement. But Republicans have only themselves to thank (or blame) for Trump, and another lost presidential election. The party establishment has done everything to keep the GOP exclusive, white and male; and that’s why — like Trump, the GOP is done too!