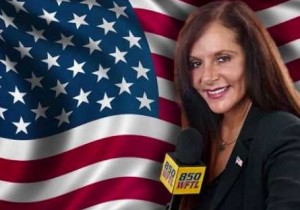 Hey critics of “vitriolic rhetoric,” lay off Sarah Palin for a minute and focus on someone who actually advocated for violence when things don’t go your way politically. Conservative radio host Joyce Kaufman already lost one job because of circumstances surrounding her fiery language and it seems her frightening words will justifiably receive some renewed interest in light of the Arizona shooting.

At a Tea Party rally last summer, Kaufman screamed to “supporters” (let’s use that term loosely because clearly not everyone in the crowd is cheering her):

“And I don’t care how this gets painted by the mainstream media. I don’t care if this shows up on YouTube, because I am convinced that the most important thing the founding fathers did to ensure me my First Amendment rights was they gave me a Second Amendment. And if ballots don’t work, bullets will. I’ve never in my life thought that the day would come where I would tell individual citizens that you are responsible for being the militia that the founding fathers designed – they were very specific. You need to be prepared to fight tyranny: whether it comes from outside or it comes from inside.”

Unlike Palin whose alleged “violent imagery” of crosshairs on a congressional district map was used purely in the context of focusing voters attention and never for a moment hinted anyone should ever get violent, Kaufman here almost seems ready to hand out guns and start a war tomorrow. Palin’s image choice and campaign rhetoric never aimed to incite violence, however it ultimately was a foolish choice simply because it now gives Palin’s many enemies the opportunity to associate her with frightening fearmongers like Kaufman.

Kaufman’s violent statements, specifically that when election results don’t turn out how you want, a gun is your only option, is not by any means representative of the Tea Party, yet is precisely the rhetoric that opponents of the Tea Party would like to highlight in order to discredit the entire movement. Maybe Sheriff Dupnik in Arizona is right after all, just so long as he is focused on this type of rhetoric, since wouldn’t both political parties, discourse in general and society at large be better off without Kaufman’s vitriol?

Watch the clip of Kaufman’s speech below: