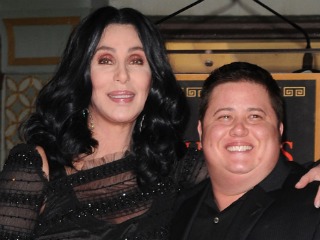 Hide your kids! You may have already heard that Chaz Bono, the transgendered former daughter of Cher and Sonny Bono who recently and very publicly underwent gender reassignment surgery, is going to be a contestant on ABC’s extremely popular Dancing with the Stars, where he’ll be competing with a female dance partner. And some people are pissed.

Chaz Bono, the “transsexual” woman who underwent plastic surgery and takes male hormones in an effort to appear to be a man, and who asserts she is a man, will appear on the upcoming season of “Dancing with the Stars”, according to ABC, the network which airs the show. He will be partnered with a woman.

Casting Chaz Bono on “Dancing with the Stars” is part of Chaz’s victory tour, which has included appearances on talk shows and the release of a book called “Transition.”

I advise parents to not allow their children to watch the episodes in which Chaz appears.

Note Dr. Ablow’s use of both the pronouns “she” and “he” after referring to Bono as a woman. He continues:

The last thing vulnerable children and adolescents need, as they wrestle with the normal process of establishing their identities, is to watch a captive crowd in a studio audience applaud on cue for someone whose search for an identity culminated with the removal of her breasts, the injection of steroids and, perhaps one day soon, the fashioning of a make-shift phallus to replace her vagina.

It is a toxic and unnecessary byproduct of the tragic celebration of transgender surgery that millions of young people who do watch “Dancing with the Stars” will have to ponder this question: Maybe my problems really stem from the fact that I’m a girl inside a boy’s body (or a boy inside a girls body).

Now, I don’t mean to be disrespectful to Dr. Ablow, despite the immense lack of respect he has shown for Chaz Bono and transgendered individuals in general. But his argument and understanding of what it means to be transgendered shifts so much within whose few paragraphs that I have to wonder whether he is even certain of what it is he’s trying to convey here.

For one, the decision to undergo gender reassignment is huge. Can you imagine? I don’t mean that rhetorically, either. I mean really: Can you fathom the level of commitment and certainty it takes to change, physically, from a man to a women or vice-versa? The cost. The pain. The time. The effort. The recuperation process. The psychological guidance it takes to understand and utilize a whole new, entirely different body. Personally, I can’t even process that. This is not a decision, despite what the good doctor may imply, that people pursue on a whim or without the go-ahead from a therapist after an extremely long and arduous process, both physical and mental. Tomboyish girls cannot simply waltz into a doctor’s office and announce they would like to become a man. That’s just not how it works! Furthermore, while puberty is definitely a confusing, weird time characterized by self-doubt and shifting hormones (And, while those hormones might bolster the argument that, you know. Teens can make really awful, rash decisions.), if all it takes is looking at a transgendered person receiving applause to make you want to surgically and permanently alter your genitals, your problem might be something other than a gender identity issue. Is the fear here that being transgendered, like, seems really fun? Like, “This person is getting applause! I like applause! Maybe I should divorce my penis?”

If a child is indeed transgendered, Dr. Ablow (and, even if you deny that this condition exists, like, medically, the mere existence of people who discuss and claim to have this condition makes it real in the sense that, look, this is something we can refer and discuss, this is a phenomenon that happens and that has a name), they will not realize it suddenly while sitting in front of a TV watching Chaz perform the paso doble. That doubt, that inkling will have existed long before, and will have manifested itself in myriad other forms. And, indeed, struggles with sexuality =/= struggles with gender identity. I would think a psychiatrist privy to research, case studies and flesh-and-blood patients would understand this and it concerns me that someone who represents the psychiatric profession seems to speak about a condition with such a lack of respect and professionalism. “She,” “he,” woman, man. Tomboy, lesbian, transman. Who cares, right? I don’t know: Maybe patients? Maybe your viewers? (Fox News, I implore you: Find a psychiatric / psychological professional who knows the difference between gender identity and sexual orientation and who knows the process for undergoing gender reassignment surgery, even if he or she doesn’t condone it. That is all I ask. I can tell you there are many serious mental health professional — who are conservative as they come, at that! — who know this difference and who have done their homework.)

If you, reader, believe that transgenderism does not exist as a valid condition, do you also believe that the impulse to switch gender is, as Dr. Ablow suggests, “contagious?” Do you share his fear for young kids exposed to transgendered individuals? Did you find his editorial right on the mark? Do you find it unprofessional? Let me know.