Antoine Griezmann, a footballer for Atlético Madrid, shared a photo on Twitter that got, as you can imagine, a ton of online backlash: 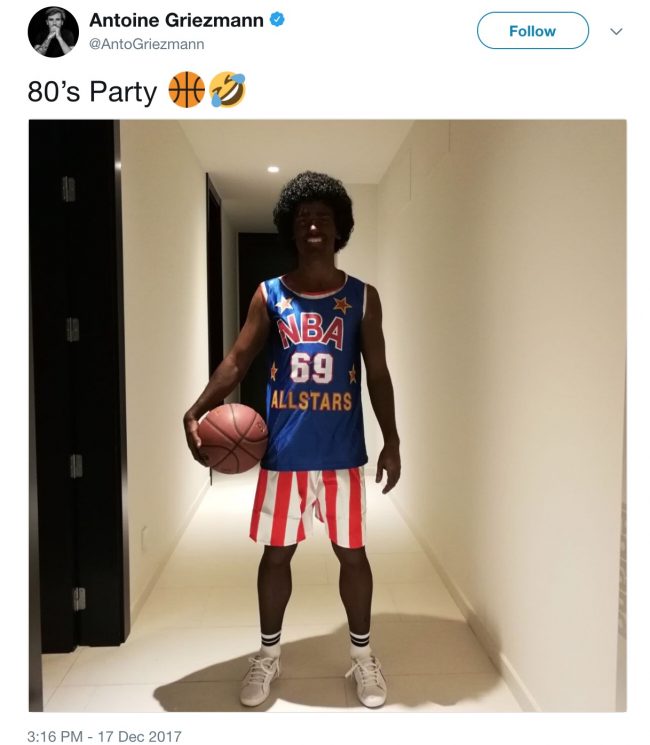 A lot of people obviously had a problem with him dressing up in blackface:

Every year, every damn year. https://t.co/R6c4xScEY7

And Overseas Racially Insensitive Imbecile of the Year goes to….. #spoty https://t.co/gdLPJmKmHD

Sad to see this from one of my favourite players. But our skin is not a costume to wear for “fun”. People struggle through life just for having this skin so it should not be worn for entertainment purposes https://t.co/bQtuBXWdFb

I genuinely thought we’d reached some sort of consensus on this not being OK, and now two in one day. I’m a bit baffled. https://t.co/K6Eg2eeV7Z

This isn’t gonna play out in your favor https://t.co/PcoXYllrX6

Delete this and your life https://t.co/nftZtaQ94o

Man WTF are you doing? https://t.co/YjDnI4V9lT

When it's OK to do blackface:

What is Antoine Griezmann thinking?

And is there nobody around him to tell him that is a very bad idea?

There are so, so many different options for an 80’s party, or a night out at the darts for that matter, that don’t involve blackface. I can’t believe we’re out here in 2017 saying don’t dress up in blackface. https://t.co/TzqsVdSOeg

I'm already stressed out about Griezmann's inevitable apology saying "a lot of my best friends are black." pic.twitter.com/0UtS3Yb7Yv

oh my god where is his agent https://t.co/6X8mB2pcvu

The tweet has since been deleted and he posted this: