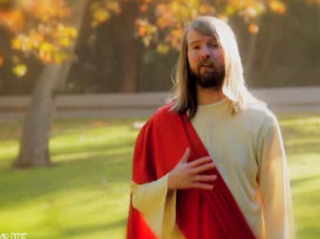 Rick Perry is trying to revive an otherwise moribund campaign by touting his religious credentials– which, against Newt Gingrich (Catholic of questionable marital history) and Mitt Romney (Mormon of otherwise squeaky-clean marital history), may be his last hope. One entity, according to Funny or Die, that is not happy to have been involuntarily dragged into Perry’s anti-gay, hyper-religious politics? Jesus Himself, who kindly requested to be kept out of politics, please.

“You don’t have to be in the pews every Sunday to know there is something wrong in this country when Rick Perry is openly running for president,” Jesus states, comically, in the beginning of his ad. He asks, peacefully, of Perry: “I just wish he’d leave me out of his sad, sad presidential campaign.” “I get it, I’m popular,” He explained, “people like to claim they know me.” He then drew a comparison to people who say they know Brad Pitt: “would you really go around bragging that you know Brad Pitt all the time?” He also made it clear that “there’s not a place” in the New Testament “where I remotely hint that it’s okay to put people to death or go to war.”

As a Christian myself, I do always get queasy about comedic representations of the Lord in viral videos and elsewhere. But there is clearly no offense to the actual teachings of Jesus meant here, and the argument that Perry using the name of Jesus for his political benefit– to contrast himself with a member of a church that has “Jesus Christ” in its name, and against another candidate who is a member of the only church Peter founded personally– should be far more offensive than anything Funny or Die can come up with to Christians is a very valid one. While Jesus probably did not say a word about satire, “give to Caesar what is Caesar’s” is arguably the most important teaching of the New Testament, one that campaign ads like Perry’s violate flagrantly and routinely. As “Jesus” concludes in this clip, “faith made America strong, but it made Rick Perry a complete imbecile.”

The “campaign ad” via Funny or Die below: