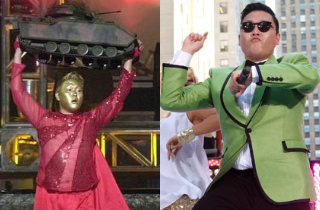 He has the most-watched YouTube video of all-time, an international phenomenon of a mega-hit in “Gangnam Style,” has made appearances on nearly every American morning talk show under the sun from Today to Ellen, and is scheduled to appear at a D.C. charity concert later this month with President Obama in attendance. It’s safe to say that Korean pop star PSY is now the “most-liked” entertainer on the planet.

It has recently been unearthed in the states, however, that eight years ago, long before achieving this massive stardom, the mega-star rapped about “slowly and painfully” killing American military members and their families.

Some context: since becoming a democracy in the late 80s, South Korea has developed a rich, sometimes over-the-top, tradition of protest. Swarms of Koreans hit the streets to protest everything from free trade agreements to North Korea to Muslim extremism to American troops stationed on their peninsula.

During a 2002 protest concert against the presence of 37,000 American troops in Korea, PSY took the stage in gold face-paint and, with the crowd egging him on, lifted a miniature “American tank” and smashed it on the ground to massive applause. UPDATE: The performance was inspired by the recent death of two Korean school girls who were run over by an American tank in South Korea. The soldiers driving the tank were acquitted by a US military court.

And then in 2004, a Korean missionary was captured in Iraq by Islamists who demanded that South Korea not send troops to aid America in the war in Iraq. Seoul refused to negotiate and the missionary was beheaded. The result: massive protests throughout Korea against both Muslim extremism and the U.S. military for indirectly bringing this fate upon a Korean missionary.

As part of the protests, PSY and several other popular Korean musicians put on a live performance of a Korean rock band’s song “Dear American.” When PSY’s turn came, he rapped:

As this particularly incendiary verse made its way to American news outlets, the outrage has grown. Conservative Twitter aggregator Twitchy sums up some of the anti-PSY anger, pondering why his anti-American military past was not discussed during his appearance on Ellen.

On the other hand, Chris Brown and Eminem have rapped about violence against women… and have followed through on it in real life.

But as others have noted, PSY’s handling of his newfound global fame has been remarkably gracious. He hasn’t thrown up the middle finger and rejected his American popularity because of the Iraq War he rightfully found so deplorable (albeit with highly vitriolic rhetoric).

The question becomes: Would he have said the same thing today now that he has precious international stardom to preserve?

UPDATE: PSY’s publicist has sent an apology from the musician. View here.

UPDATE 2: Partial video has surfaced of one of the aforementioned anti-American military performances. Watch here.