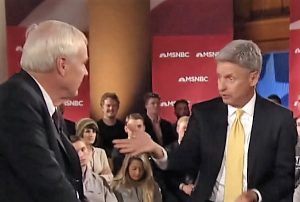 Former New Mexico Governor Gary Johnson is also ostensibly running for president, and although his town hall with Chris Matthews Wednesday night was dominated by another “Aleppo Moment,” Johnson actually said a bunch of other stuff, too. One key exchange that was very revealing involved the prospect of a nuclear attack under the next presidential administration.

Former Massachusetts Governor and Johnson running mate Bill Weld cracked wise about the possibility of a nuclear-armed Donald Trump, which host Chris Matthews zeroed in on by asking which of the two major party candidates would be better entrusted with that responsibility, in the unlikely event that the Johnson/Weld ticket fails to find victory in November.

The responses were illuminating in a number of ways, starting with that convulsive laughter you had to stifle when Johnson insisted “It’s me!”, but continuing on from there, as Weld professed profound confidence in Hillary Clinton, but Johnson seemed worried that she might just nuke everyone so she wouldn’t look weak, for whatever reason:

Gov. Weld: hillary clinton is clearly qualified to be commander in chief and president of the united states. donald trump is clearly not qualified. and i’ve encouraged him almost with affection to think some of other job or profession. and i’ve suggested the laundry business. co-do great in the laundry business. he has business smarts. but president of the united states is the wrong tree to be barking up for him.

Gov. Johnson: I think she is gonna press the button.

Gov. Johnson: Well, if confronted with that ten minutes, she will be hawkish. She will be more hawkish in that role.

Chris Matthews: You think she has a happy trigger?

Gov. Johnson: I think she won’t err on the side of not being the aggressor.

The fact that Johnson and Weld are at such loggerheads over Clinton may not seem like a big deal now, but if the Johnson/Weld candidacy continues to look as though it will benefit Trump in the end, Weld may just end up withdrawing from the ticket, as has been speculated upon even before this.

Substantively, though, this statement further calls into question the judgment of Gary Johnson, who sees Donald Trump as more qualified to decide whether or not to launch a nuclear attack than Hillary Clinton because he sees foreign policy through the simplistic lens of “hawks” and “doves.” We elect a president based on how they will decide what to do when the time comes, not what they’ve decided in advance. Maybe there will be a situation in which we want the button to be pressed, and maybe it’s not just pressing a button, but deciding how and where to respond to a nuclear attack.

I don’t know whether Hillary or Trump will “press the button,” and I don’t want to know. I want to know which of them will make the right decisions. That feeling you got when Johnson said “It’s me?” There’s part of your answer right there.